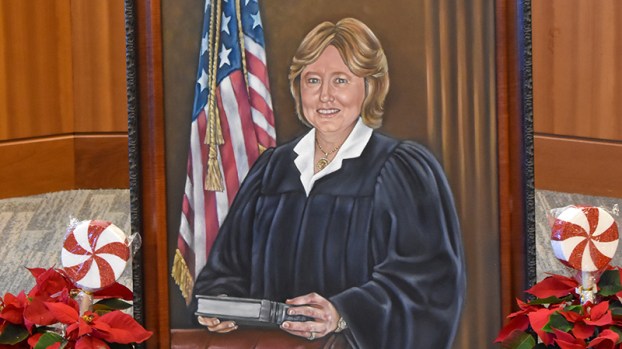 A retirement celebration was held for longtime State Court Judge Jeannette L. Little Thursday afternoon at the Troup County Government Center. A painting of Little was presented and will be hung in the courtroom. It was painted by Melaney Hutchins Bracken, a longtime friend of Little.

State courts have jurisdiction within one county. They hear misdemeanors, issue search and arrest warrants, hold preliminary hearings for criminal cases and hear some civil matters.

The ceremony was led by Superior Court Judge Nina Markette Baker, who described Little as “someone who has broken just about barrier there was for many of us … we all stand on her shoulders.”

Friends and colleagues described Little as a trailblazer for women in the legal profession and hailed her work in establishing pre-trial diversion and alternative sentencing programs that reduce recidivism.

“One thing Jeannette’s got in common with Judge Ruth [Bader] Ginsburg, who died not long ago — Jeannette graduated in top of her class from Mercer, she came to LaGrange and nobody offered her a job … women just weren’t hired as lawyers,” said Alfred Zachry, a lawyer, at the celebration.

Taylor also spoke about her friendship with Little, calling her a “matriarch of the legal community.”

She was elected Judge of the Small Claims Court in 1979, which was later made into the Chief Magistrate Judge of Troup County. In 1986, she was appointed to the state court judgeship by Gov. Joe Frank Harris.

Taylor believes Little’s biggest accomplishment in her career was her work to promote alternative sentencing, moving away from older, harsher punishments like jail time and fines.

“She saw early what many of us now so strongly believe in, that our mission and purpose is to reform behavior,” Taylor said. “It’s not about what the punishment is, it’s about stopping behavior.”

Taylor said Troup’s DUI/Drug Court was one of the first 10 courts of its kind in the state. The court has graduated more than 550 people since its founding. Those graduates are about four times less likely to reoffend, Taylor said, adding that it saves money for the county and saves lives.

Forsyth County Chief Judge Russsell McClelland said Little was a mentor to him and others, saying she “had a great impact with young lawyers” and was always available for questions.

McClelland said he set up a DUI court in Forsyth modeled off of Troup’s. While almost $26 million is now appropriated yearly across the state for such courts, he said that at the time of the Troup court’s founding, many superior court judges “were not ready for it … but Jeannette knew it would work.”

Dr. Kelly Veal, a counselor who works as a treatment coordinator for the county, praised Little’s court demeanor, saying she was fair and cared about those she sentenced.

“I was able to see a judge who loved people, who really wanted the best for the people in the court, and although she had to lay the hammer down sometimes … it was always out of love,” Veal said.

Little was last to speak, thanking the attendees and saying the retirement brought “a lot of bitter-sweetness.”

“I always say, and I’ve said it to my kids, but to every other young person, don’t go looking for a job that you think might get you tons of money or whatever,” Little said.

“You never work a day in your life if you love what you do. And I loved what I have been doing for the last 40 years.”

Little, a native of Troup County, said she’s never wanted to live and work anywhere else. In law school, she only wanted to return home and serve the people of her home county. She said she hopes to still occasionally practice law.

“It’s sad in a way because I have loved it so. But I know there are other good things coming down the line. I don’t know exactly what the future holds, but I know who holds the future,” she said, pointing upward.

The Troup County School System currently has more positive COVID-19 cases and more people in quarantine than it’s had all... read more