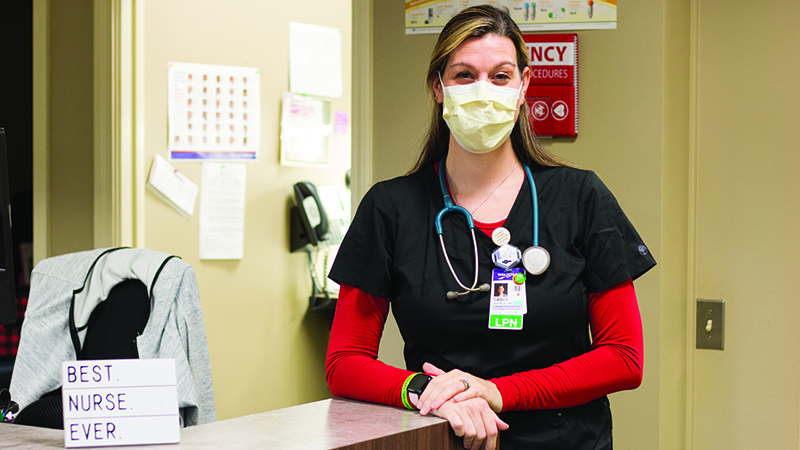 Casey Duffield is a 39-year-old nurse at Wellstar West Georgia caring for patients day in and out. When you look at Duffield, you would never know that she is fighting a rare disease.

When Duffield was diagnosed with a strain of muscular dystrophy disease, hereditary myopathy with early respiratory failure (HMERF) in the fall of 2017, she could not find any specific research  or advocacy group for her strain of MD. At the young age of 35, the news arrived to Duffield and her family that her gene #603689, on the TTN protein chain, was damaged.

Both Duffield and her family were in shock. Duffield said that doctors had assured them that only males would manifest the gene and that females could only be carriers.

Now, her and her family are advocating for research and awareness through the foundation Casey’s Cure.

When Duffield was a toddler, her father was diagnosed with a form of muscular dystrophy.

“He was misdiagnosed several times over the course of many years because there was no genetic testing available at that time,” Duffield said.

“I was a toddler when he first started getting symptomatic. I just know his path at some point took a turn for the worse. He was in the hospital in the ICU for about 13 months straight.”

Duffield was nine-years-old when her father left the hospital. He was completely wheelchair-bound, had a trach for his hyperventilation syndrome and had to have nurses with him while he slept.

Duffield said his condition progressed and at the age of 17 she became his full-time caregiver, never thinking that she could suffer his same fate.

Duffield’s mom, Chris Duane, said that after graduating from high school, Duffield attended nursing school, mothered her young son, took care of her dad, and studied until the wee hours of the morning so she could earn her nursing license.

After graduating from nursing school, Duffield used everything she’d learned to make her father as comfortable as possible.

He was bed ridden and had a tracheotomy performed to provide breathing assistance and required full-time nursing care.

A few years later, when Duffield was in her early 30s working in a nursing home, she started having pains, aches and tiredness in all of her major muscles.  Before that, she said she had minor symptoms but wrote them off as growing pains or that she was just tired from working. But the symptoms progressed quickly when she reached her 30s.

“In my early 30s, I should not have been having the problems I was,” Duffield said. “I spent a lot of time on the floor in the long-term-facility I was working at. My grip was getting worse, my upper body strength wasn’t as strong as it used to be, and there was no reason it should have been.”

When Duffield left that job to search for one that had more stability for her and her family, she went to have a complete physical done.

“I had some blood work done and the blood work came back that certain levels of my creatine kinase was elevated, which is an indicator in someone who has muscle death,” she said. “There should be no reason for mine to have been that way.”

At that point, Duffield went to see a neurologist because of her family history. They concluded that Duffield had muscular dystrophy, but they didn’t know anything further than that.

“I just turned 35 and 35 is supposed to be the grand number of your life, but 35 was not a good year for me,” Duffield said.

She sent her sample off, and it came back that it was not limb-girdle but HMERF.

“When we got those results, we reached out expecting to find something, but there was no advocacy group, no research, nothing,” Duane said. “This was the same as it was when her dad was sick 40 years ago. Our first thought was, OK, we need to get people aware, and we’re going to start with an advocacy program.”

The Foundation for Casey’s Cure mission is to support education, support and research for rare MD patients, so none are left behind.

“I want people to know they are not alone,” Duffield said.

“There is no support system here that I can even find for anybody with MD. People don’t talk about it. They don’t know about it.

The idea of a cure or even research for Duffield’s gene of MD seemed unattainable until Duane started reaching out to doctors with a mother’s plea to study her daughter.

Duane said that some doctors at first didn’t take her seriously but now she has a few on board and ready to research Duffield’s genes.

There’s one roadblock they face: funding.

Duffield said there are millions of patients suffering today with MD with no available treatments.

“We direct all the money toward research dedicated to the underrepresented strains of MD, so that all MD sufferers are seen, heard and helped,” Duffield said.

Casey’s Cure needs to raise the initial $50,000, out of a total of $350,000, in order to get research started with The Charles River Lab and Dr. Tim Yu’s Lab with Dr. Granzier from Ohio State.

“If we don’t start research soon, I will eventually suffocate to death,” Duffield said. “I need people to understand that in five years when I look sick, by time when we get to that point where I look as it is a problem, it may not be too late, but it won’t help as much as it would now. I need people to give and I know how that may sound, but I want to live a quality of life.”

Duffield said that a part of her job is giving up herself to others every day to make sure they are taken care of.

“I can’t keep doing that if I am stuck in a bed on a ventilator,” Duffield said. “I may not be from here, but I am part of this community. I see your aunts, uncles, grandparents, neighbors, everyone in this community and make sure they are taken care of. We need help now.”

Duane said that the researchers are ready, the science is ready and now all they need is the money that can focus on rare forms of MD like Duffield’s.

A GoFundMe has been set up for a way to donate at charity.gofundme.com/o/en/campaign/finding-caseys-cure3.

Duane added that all donations are also tax deductible.

“I don’t want someone else to feel like they are alone, and I want the community to help me find other people like me because I get it and I am here for them,” Duffield said. “We can offer that support.”

Duffield said because of COVID-19, she’s not able to be up and about as often in the hospital. Therefore, it has increased her MD symptoms.

“There are somedays where I can get up and do anything everyone else can, and I bet you $5 you have already passed by me and didn’t even know anything was wrong with me,” Duffield said. “Then, there’s some day where I am struggling to get around the floor, hold my pen or vacuum my house.”

Not only is Casey’s Cure looking to kickstart research on the rare forms of MD but also create a registry for HMERF patients and other rare forms of MD to compile a database of affected patients to support any possible research/clinical trial information.

Duffield said she’s hopeful that people will be inspired by her testimony to help her achieve her goal of fighting the rare disease.

For more information about Duffield and her battle with MD, visit www.caseys-cure.org.