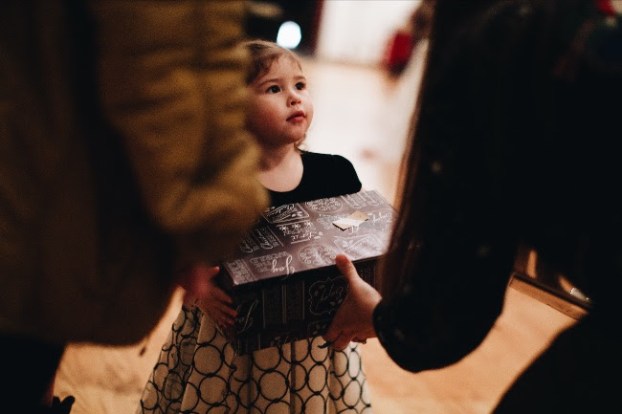 During the weekend, more than 150 children in Hogansville were distributed Christmas presents at the Pioneer Center.

For the past month, The Pioneer Group collected Christmas shoeboxes and donations to provide Christmas to children in the community.

Pioneer Group Chairman Masey McClain said it was like Operation Christmas Child but for the community in their own backyard.

“It was above and beyond what we expected,” McClain said. “We had enough to give Christmas boxes to every kid that came.”

McClain said that her favorite part was seeing the expressions on each child’s face.

“It was the most joyful night,” McClain said. “This may sound crazy, but I think was one of my favorite nights ever.”

During the festivities, each age group would go inside to grab a Christmas box to help social distance during the event. McClain said this helped prevent having over 150 kids in a small area at once.

“They made the sweetest faces and were all so grateful,” McClain said. “I don’t think anyone left without a smile on their face, to be honest. It was so special.”

Not only did each child that attended receive a box filled with Christmas presents but the children and their families got to enjoy a Roger’s Barbecue meal and make crafts.

“So many parents came up to us and were so grateful for everything,” McClain. “No one just came and took a present and left. Everyone who came made an effort to participate in the whole event.”

Any child between the ages of three and 17 was able to attend the Very Merry Christmas event.

“Every age group was there,” McClain said. “I didn’t expect a lot of teenagers to attend, but we had a pretty great turnout of teenagers and they all seemed to love it.”

McClain said the event gave everyone in the community a reminder to experience some joy even in the midst of hard times.

“I think everyone was just happy to be together and kind of be reminded of what Christmas is, especially this year,” McClain said. “So many people in our community stepped up and donated boxes and filled them with such great items. People really made an effort to make it special.”

McClain said they hope to host the event again next Christmas.

This year Kia Motors is the countdown sponsor for the annual New Year’s Eve celebration on Times Square. Kia is... read more