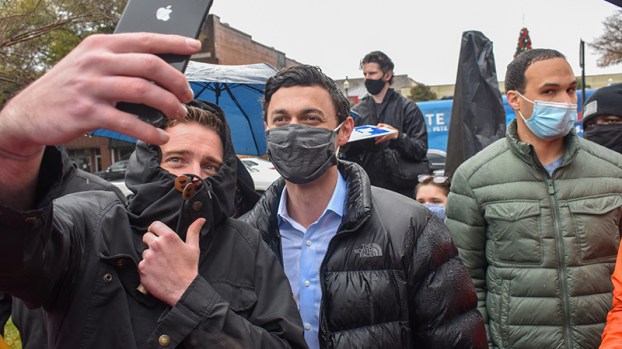 Georgia Senate candidate Jon Ossoff held a rally in the rain at Lafayette Square on Wednesday.

Ossoff, 33, is an investigative filmmaker who first rose to prominence when he ran and lost in a special election for Georgia’s sixth congressional district.

Now, he and businessman Perdue are in a runoff after Perdue finished first in November but failed to break the 50 percent threshold.

Sen. Kelly Loeffler is also on the runoff ballot, challenged by Democrat Raphael Warnock. Loeffler will be at the square on Friday. Democrats would need to win both races to have 50 seats in the Senate, enabling Vice President-elect Kamala Harris to cast tie-breaking votes to advance Joe Biden’s legislative agenda.

Hundreds of millions of dollars have poured into Georgia to support the four candidates. Election day is Jan. 5, though early voting has already begun.

“We can’t afford paralysis at a moment of crisis like this,” Ossoff said. “We need to enact legislation that helps the people, that serves working people in this state who haven’t gotten a fair shake.”

Ossoff attacked Perdue for the controversy around his stock trades.

“What did David Perdue decide to do when he got private briefings in Washington about the threat to our health? Did he warn us of what was coming? No, he called his broker to buy stock in manufacturers of vaccines and medical equipment,” Ossoff said. “While he told the rest of us the risk was low. That’s corruption.”

Perdue has said that his stock portfolio is managed by advisers and that he did not tell them to make the trades. Perdue and Loeffler have sought to paint Ossoff and Warnock as socialists. Kevin Littlefield, chairman of the Troup County Democratic Party, said at the rally that Republicans have been labeling Democrats socialists for a long time, and that they should ignore it.

“In 1938, the Democratic Party passed over the objections of the Republican Party, a law to prevent six-year-olds from working 15-hour days in mines, and textile mills … I bring that up today, because the response is the one we hear right now,” Littlefield said. “They scream, ‘That’s socialism!’”

Outgoing state Rep. Bob Trammell, who lost his seat in November to David Jenkins, said Ossoff would “put people ahead of a portfolio.”

Democrats have struggled in the past to turn out voters for runoff elections. Trammell cited the close margin in the presidential race — Biden won Georgia by 12,670 votes — before asking people to mobilize friends and family.

“The difference in this election was your next-door neighbor going out to vote or staying home,” Trammell said.

After speaking, Ossoff took questions from people in the crowd. Two of them came from young women who asked him why he didn’t support the green new deal and Medicare-for-all.

Ossoff said he supports investing in green infrastructure, reentering the Paris Accords and reaching net zero carbon emissions within the next 20 years but that the green new deal senate resolution was not detailed enough to earn his support as it is.

“My responsibility to the people of Georgia is to understand exactly what it means for our state,” Ossoff said.

On healthcare, Ossoff said he believes healthcare is a human right but was instead in favor of a public option, which “if it’s well-executed, will come in with lower premiums and better coverage than many private plans.”

Another woman, who said she was fired from her job without cause, asked about right-to-work laws and labor rights.

“What we have to do is protect workers in this country by making it easier for unions to organize workplaces and demand higher wages and better working conditions, so that you have the right to appeal termination without just cause,” Ossoff said.