Kelly Loeffler stumps at the square 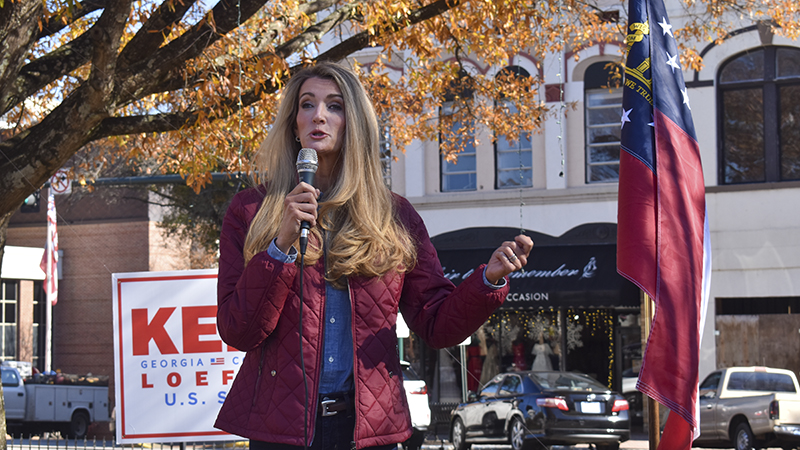 Sen. Kelly Loeffler closed out a busy week for politics in LaGrange by speaking at Lafayette Square on Friday.

Her fellow Republican incumbent, Sen. David Perdue, spoke at Kimble’s Food by Design on Tuesday. His opponent, Democrat Jon Ossoff, spoke at the square on Wednesday.

Loeffler urged a crowd of supporters to get out and vote for herself and Perdue and to urge friends and family to do the same.

Loeffler, a businesswoman, was appointed to her seat by Gov. Brian Kemp last December. Her husband is CEO of Intercontinental Exchange, the owner of the New York Stock Exchange.

Loeffler is in a Jan. 5 runoff after she finished second in the crowded Nov. 3 special election behind Democrat Raphael Warnock. Warnock is the senior pastor at Ebenezer Baptist Church, occupying the pulpit once held by Martin Luther King, Jr.

Hundreds of millions of dollars have poured into the state to support both parties’ candidates.

In LaGrange, Loeffler repeated her attacks on Warnock, casting him as “radical liberal Raphael Warnock.”

“We need to make sure that people understand that this country could drift toward socialism, if we don’t hold Georgia,” Loeffler said.

Democrats must win both elections to have 50 seats in the Senate, which would enable Vice President-elect Kamala Harris to cast tie-breaking votes in support of Joe Biden’s legislative agenda.

Loeffler drew on President’s Trump recent visit as well. Perdue and Loeffler have not said that Trump lost the presidential election, and have sided with the president as Trump has attacked Kemp and Secretary of State Brad Raffensperger.

“President Trump said it too,” Loeffler said. “He said, get out and vote for David Perdue and Kelly Loeffler. Because they are fighting for you.”

Loeffler was introduced by State Sen. Randy Robertson, who said Loeffler was “willing to stand there with us and walk through the valley of the shadow of death and fight just as hard as we fight.”

Loeffler drew on excerpts from Warnock’s sermons to say he was against the police and military. She also said a Democratic Senate would raise taxes, pass a Green New Deal and eliminate private health insurance.

After speaking, Loeffler took a few minutes to speak with media. Loeffler was asked whether she supports Alabama Rep. Mo Brooks’ effort to overturn the Electoral College vote when Congress meets in January.

“Well there’s a lot to play out here still in Georgia,” Loeffler said. “We have many investigations underway right now. We’re in the courts looking at this, and we need to continue to let this process play out. My focus today is on Jan. 5, we have to win that election.”

Loeffler was also asked about a recent report from The Daily Beast that her Atlanta mansion’s appraised value went from $10.5 million to $4.15 million in one year. The change in Fulton County’s appraisal led to lower property taxes for Loeffler and her husband.

On Thursday, Kemp spoke out about the threats made toward him and his family from people who believe the governor was responsible for Trump’s loss in Georgia. He also condemned conspiracy theories about the death of Harrison Deal, a Loeffler campaign staffer, who was recently killed in a car accident in Savannah.

“There’s certainly no place for that,” Loeffler said of the conspiracy theories and threats. “I absolutely reject what’s going on. I think we have to be incredibly respectful of all families, our elected officials, as well. And what we have to focus on here is what’s at stake on Jan. 5.”