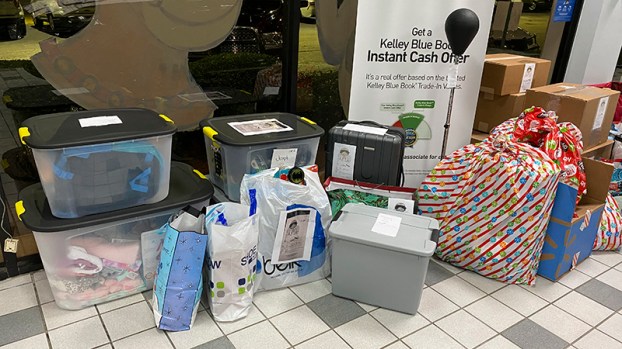 Above shows a small portion of Christmas presents gathered by a local Facebook page, Chatty LaGrange Women, for more than 50 children in the foster care system.

One local Facebook group filled with local LaGrange women put their minds and hearts together to gather Christmas presents for more than 50 kids in foster care.

Victoria Thaman, who took charge of the project, said over the course of the past few weeks Chatty LaGrange Women have been collecting Christmas presents for the Foster Care Association in Troup County.

“Normally, they have a lot of churches and other organizations donate and help out with Christmas but due to COVID a lot of their resources were cut,” Thaman said.

“The association had all these extra children this year, and so the ‘Chatties’ stepped in and said we would take them on.”

Thaman said she put a message out to the group that there were children in private foster care homes that needed presents and more than 100 members stepped up to provide gifts this year.

“We had at least two people per child sponsored,” Thaman said. “We divided into groups and got the sizes of each kid and just asked extra questions so we could get some more specific gifts for each child to make it more personal. Most of them come from such broken homes and don’t have anything so we wanted to make this year special.”

Thaman said each child was able to get a toy or item that was personal to them and all of them also got new clothes, a new backpack, jackets, shoes and a storage bins.

“We also got them all new toiletries,” Thaman said. “We got all children at least one toy but most of them got several toys and something meaningful to them.”

The group also went the extra mile and bought each foster family a gift.

“We got them a family gift full of goodies,” Thaman said. “We put things in there like drinks, pizza coupons, movies and popcorn. Stuff they could use for a family night or movie night. We tried to do all themed baskets that would give them a special night together.”

Thaman said it was important to her to give back to the community during the holiday season.

“My family just has a service mindset,” Thaman said.

Thaman said she hopes the presents provide a sense of hope for the children facing dark times, especially during the holidays.

“I just feel like they’re just knocked down over and over again, and they can lose that hope,” Thaman said. “Hopefully, they see this positive thing and know they have something of their own. We just want them to see that light.”

The Facebook page originally started out as an information page for LaGrange women but has grown since.

“We’ve really tried to turn it into a community-oriented and service-oriented organization,” Thaman said. “We’re just a Facebook page, but we’ve already done so much to help in the community.”

Presents have been unwrapped, Santa has returned to the North Pole and families in LaGrange can enjoy the rest of... read more