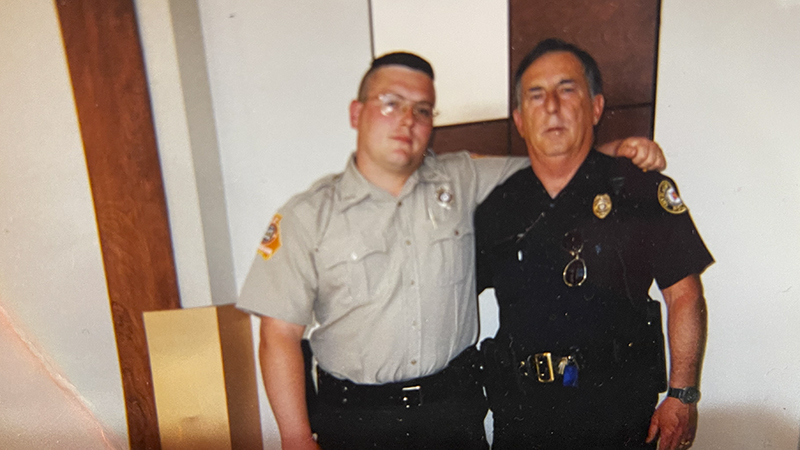 Left, Sgt. Mark Cavender poses for a photo with his dad back when they worked together at LPD.

Cavender served the LaGrange Police Department for more than 30 years, following in his father’s footsteps who worked for LPD from 1946 to 1955.

Cavender started with LPD in April 1973 as a foot beat officer and worked his way through the ranks to captain before retiring in 2005.

“I’ve shared a lot of stories here lately with people that worked for him and with him at the police department over the years,” Mark said. “The officers that are still working today that worked for him always said he was tough but fair. He’s been referenced as being a cop’s cop.”

Mark said Cavender was always introducing himself to new officers and looking to help anyway he could, even after he retired.

“There’s a lot of younger officers that never worked with him or for him, who had gained admiration and respect for him,” Mark said. “We would have lunch every week with each other, and our stories always turned to the cop stories. He was my go to when I first got into law enforcement and how do you deal with this emotion or that emotion.”

Mark said his dad was always there for him and his family whenever they needed him.

“He was a cop’s cop but was my daddy first and foremost,” Mark said. “He was tough, but he was loving and caring more than anything. He loved being a cop, but he loved his family more.”

Mark followed in his dad’s and grandfather’s footsteps and began working for LPD in 2002.

“He was excited when I made that decision,” Mark said. “I came home after the military really didn’t know what I was going to do. He didn’t try to push me toward a career in law enforcement but whenever I decided that that was the path I was going to take he was all about it.”

Cavender was there to pin Mark when he was promoted to sergeant.

“He was very proud,” Mark said. “I think he still lived vicariously through other police officers he knew and me because he just loved being a cop. There’s no doubt that he was proud that I was serving, not only in law enforcement, but serving the agency that that he served for almost 33 years.”

“We are grateful for his years of service to the citizens of LaGrange as a police officer, detective, SWAT Team member and division commander,” said Police Chief Lou Dekmar. “His service to our community extends beyond the police department. He was also involved in civic organizations and was always quick to lend a hand to those in need. Steve will be missed and his legacy of service will honor his contributions to our community.”