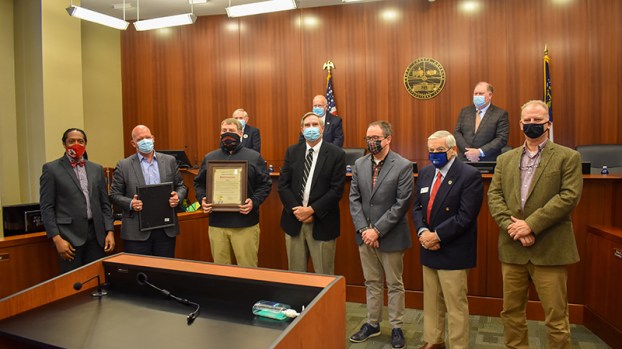 A proclamation recognizing Tuesday, Jan. 5, 2021, as Callaway High School Cavaliers Championship Day was read aloud at the Troup County Board of Commissioners meeting and presented to head coach Pete Wiggins. It was given on behalf of Troup County and its three cities.

“We know that our own Callaway High School was very successful in their season this year, and were able to achieve the state championship … we all know that for many years they’ve been an elite program and been doing a great job, so this year they hit the pinnacle,” Crews said.

Wiggins thanked the officials, as well as fans, parents, and the businesses and people in the community who supported the team “throughout an incredible journey.”

“We saw great adversity,” Wiggins said. “I’m very proud of our athletes, our players, our coaches, our students, our faculty, administration, both in our high school and at the county level, for supporting us and just believing in what we do.”

They bested Fitzgerald in the state title game, 22-17, winning their first state championship.

Shumate emphasized TCSS’s commitment to extracurricular activities but also thanked the community for rallying behind the team.

“What I was really proud of … this wasn’t just a Callaway thing or a Hogansville thing. This is Troup County,” Shumate said. “And I want these guys to go and compete on Friday night, the three high schools with each other and try to beat each other, I get that. But at the end of the day, the other two schools are super supportive and their school communities, their coaches were up at the game cheering on Callaway because they do represent all of Troup County. And so, this is one unified group.”

A true hero of faith: LaGrange pastor and chaplain dies from COVID-19

Family and friends say he stayed steadfast and faithful to the end, but the Rev. Charles Chapman died this past... read more