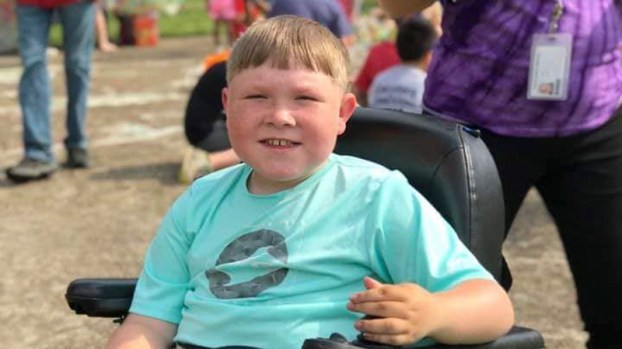 Above, Gavin Pjinenburg is an 11-year-old Rosemont Elementary School student whow as diagnosed with muscular dystrophy at the age of 6.

Within 36 hours, the community came together to raise more than $5,000 to buy Mobile Arm Supports for a local 11-year-old boy diagnosed with Duchenne Muscular Dystrophy.

Gavin Pijnenburg, a student at Rosemont Elementary School, was diagnosed with Duchenne Muscular Dystrophy when he was six years old.

Duchenne Muscular Dystrophy is a progressive disease that primarily affects males and typically appears between the ages of 2 and 6.

It limits the body’s ability to produce dystrophin, which is a protein that helps muscles operate properly.

Gavin was eight years old he was confined to a wheelchair, but he does not let that stop him.

“Before he was in the wheelchair, he would be walking to class and just get so tired,” said Gavin’s mom, Jessica Pijnenburg.

“We started using a wheelchair at school just to get to class. It just progressively got worse and his legs started giving out.”

Now, Gavin has begun to lose the use of his arms, which makes it hard to do simple things like eat on his own.

With the community’s support, the family was able to purchasing Jaeco Multi-link Mobile Arm Supports for each arm, which will give him back some independence and improve Gavin’s quality of life physically, socially and emotionally.

The arm supports are expected to arrive any day.

“He doesn’t let this diagnosis stop him,” Pijnenburg said. “If there’s something he wants to do, we find a way for him to be able to do that.”

“For him to be able to play sports was a complete change for him,” Pijnenburg said.

“It boosted his confidence, gave him back some of his independence and just let him be a kid. His grades improved, and he went from being a ‘C’ student to an all ‘A’ student.”

The new support arms will allow him to not only keep playing basketball but also enable Gavin to be more independent at school.

Pijnenburg said they take it day-by-day with Gavin with his MD.

“We don’t want him to give up,” Pijnenburg said.

“We want him to keep doing everything that he can do, that he wants to do. We do what we can to keep his morale up. For us as parents, this is not what we envisioned our life to be, but it’s the way God envisioned it to be. That’s the way that we look at it.”

Pijnenburg said it was an emotional experience to have the community rally behind them.

“It is awesome to know that we have a community that helps each other out and is there to help fill in the gap,” Pijnenburg said.

Pijnenburg said Gavin will be able to use the arms for as long as he needs them, and they can be adjusted when his arms grow.

The family is grateful for the community’s support.

“Thank you so much for all of the support and the love for this sweet boy that is so special to so many,” Pijnenburg said.

“We’re truly grateful for your generosity and willingness to help us help Gavin.”

The vast majority of locals are extremely concerned about the COVID-19 pandemic, but half of them would not get the... read more