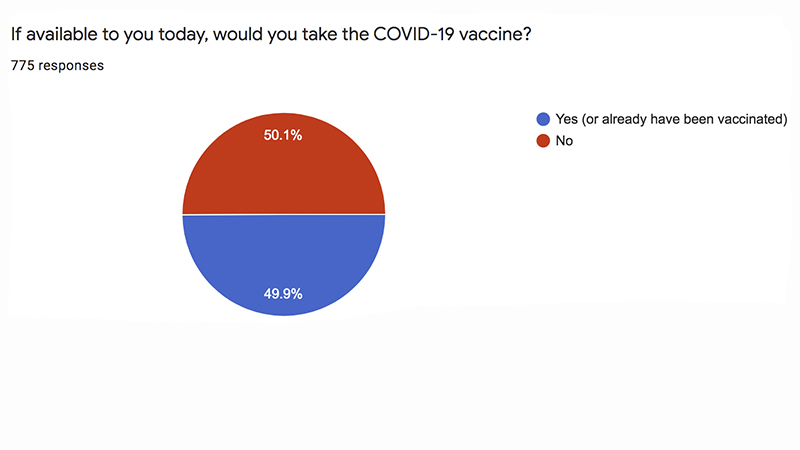 The vast majority of locals are extremely concerned about the COVID-19 pandemic, but half of them would not get the COVID-19 vaccine if it was available today, according to a LaGrange Daily News survey.

The LDN published a survey earlier this week, asking Troup County residents questions about the COVID-19 pandemic and the vaccine. A total of 783 people, a little over 1 percent of Troup County’s population, took the survey, and the answers couldn’t have been more split about the vaccine.

When asked “if available to you today, would you take the COVID-19 vaccine,” the responses were almost perfectly evenly split, down to a single vote. A total of 388 people (50.1 percent) voted no while 387 voted yes (49.9 percent.)

However, most people ranked their concern about the virus as extremely high.

Here’s a look at the entire survey and some of the responses:

Most people voted that they weren’t very confident in the COVID-19 vaccine and its ability to stop the spread of the virus. With a chance to rank confidence (1 being lowest, 10 being highest), 170 respondents, or 21.9 percent, voted “1.” “Eight” was the second most response at 14.8 percent, followed by “10” at 13 percent. The average confidence rating was 5.57.

Respondents also had an opportunity to explain why or why not they are in favor of taking the COVID-19 vaccine.

“Because it’s not as dangerous as government and the media make it out to be,” one person said.

“Would you want something in your body that has been made in a short amount of time and you don’t know what the affects will be?” another person said.

Many other people who didn’t take the vaccine said it “was made too quickly” or there was “not enough testing.”

Another said: “Everyone is making this virus out bigger than what it really is. ITS NOT WORTH SHUTTING OUR COUNTRY DOWN.”

Others mentioned worries about getting pregnant or said they had already had COVID-19, so they felt they could wait.

One person voted that they were a 5 out of 10 in confidence in the vaccine, but believed taking it was the right thing to do.

“Its all about doing what’s best to protect others that cannot receive the vaccine due to their medical issues, just like the vaccines we already get,” that person wrote. “We have to do our part.”

Others are just waiting, hoping once the vaccine is released to the majority of the population that there are minimal side effects.

“I’ve never been comfortable taking any vaccines,” one person wrote. “If this vaccine works out for most later I may be willing to.”

Others are confident in the science.

“I have family in the medical field who have told me they feel safe therefore I trust their opinion and will follow suit,” said one respondent.

“I believe in science and trust the research,” another said.

“Even if it doesn’t help it provides steps taken to slow the spread and END THIS PANDEMIC,” wrote another.

A majority, or 57% of the 219 people who have had COVID-19, or had someone in their home with COVID-19, would not take the vaccine if it was available today. Only 43 percent of people in that situation said they would.

“One” was the fourth most popular answer with 65 votes, or 8.4 percent.

Most people also said they are being very precautious. Given a chance to rank their precaution level 1 to 10 (1 being least, 10 being most), “10” was the overwhelming response with 262 votes, or 33.8% of all votes.

“Seven” was actually the fourth most popular answer with 8.5 percent of responses, and “one” was fifth most at 7.1 percent.

Troup County is currently in the midst of its worst surge in cases since July, when cases reached their highest point locally.

Overall, since the start of the pandemic, there have been 4,221 total cases in Troup County and 123 deaths.

Neither of the COVID-19 vaccines being given out in the United States, Pfizer or Moderna, contain the live virus, according to the Center for Disease Control. Therefore, the CDC says you cannot catch COVID-19 from the vaccine.

The CDC says that both vaccines teach our bodies how to recognize and fight the symptoms of COVID-19, and that some symptoms, such as fever, are normal. DPH also lists chills, tiredness, and headaches as potential side effects.

The Georgia Department of Public Health notes on its website that 70,000 people participated in vaccine trials and that the vaccines have shown to be 95% effective in preventing COVID-19.

GDPH is in portion 1A+ of the rollout, which includes healthcare workers, long-term care facilities and law enforcement personnel.