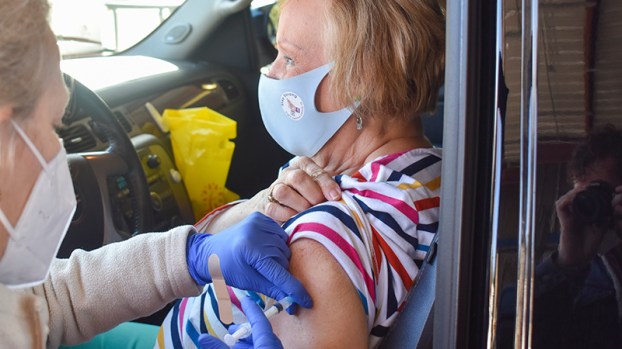 Above, Jane Fryer receives a shot of the Moderna vaccine on Friday, Jan. 15, at the Troup County Bus Barn.

On Friday morning and afternoon, a steady stream of cars made their way through the Troup County Bus Barn, stopping to receive doses of the Moderna COVID-19 vaccine.
Approximately 450 people were scheduled to get a shot, according to Leslie Leonard, county nurse manager for the Troup County Health Department.

“I feel like we’re making a little difference, that we’ve worked for this so long, and it’s been around and, even though we’re in the peak, that there’s still some light at the end of the tunnel,” Leonard said.

The vaccines were administered by the health department for eligible recipients who were lucky enough to get an appointment. The process was quick and easy, recipients said.

After stopping at the entrance and having someone confirm their appointment, cars made their way to another station to have their paperwork checked and get information about the vaccine.

IDs were checked to confirm people’s age and in the case of first responders and healthcare workers, badges were shown.

Vaccine recipients have to bring a filed-out consent form or fill one out on site.

The shots themselves were given in two lanes at the open-air repair shed, where nurses met recipients at their window and asked questions about their health.

Then came the shot and a bandage. Each recipient received a card telling them which vaccine they received and the earliest date they could receive a second shot.

Recipients had to wait near the exit for 15 minutes before they could leave, in order to make sure they didn’t have any immediate negative reaction to the vaccine.

Recipients said they had the vaccine in their arm within 15-20 minutes of arrival. With the extra 15 minutes of waiting before leaving, the process lasted just 30 minutes for most.

Lucas Whitney said it couldn’t have been more efficient.

Pamela Masters, a healthcare liaison for the health department, said demand was high, and some tried to get vaccinated without an appointment.

“We had a line outside the gate at eight. A lot of folks in the line early this morning didn’t realize that they needed to have an appointment,” Masters said.

Masters said the appointments, even if difficult to schedule, made the vaccination process orderly, preventing a disorganized free-for-all.

“We definitely don’t want to have elders camping out overnight, you know, trying to be first … we’re not going to run out of the vaccine, because every appointment is matched to an actual dose,” Masters said.

District 4 Public Health opened an online form last weekend for eligible people to fill out. Health department workers began calling people back on Monday to schedule appointments. The form was taken down and replaced with a phone number, which was quickly flooded with calls.

Troup residents reported calling hundreds of times, only to receive a busy line or be told the queue was full.

“I’ve heard a lot of my friends say it took them a long time,” said Judy Neighbors, who received her vaccine with her husband, James. “It took me seven calls. And then I’ve heard another person that said he called 149 times.”

Whitney said the safety and peace of mind is worth the effort. When he served in the Air Force in the 1970s, he had his share of shots.

Four nurses were administering shots at the repair shed, with four other workers handling paperwork. The health department practiced this process in the past in case of a pandemic and has previously vaccinated healthcare workers and first responders at the same site.

“After a couple hours of the first one [vaccine drive], we got in the swing of things,” Leonard said.

Leonard said the day was a “community effort.” She thanked Troup County EMA, LaGrange Police, the Troup County Sheriff’s Office, firefighters and others for their organizational help, as well as the school system for lending them the space.

Recipients had something to be hopeful about after months of isolation. Judy and James Neighbors look forward to socializing and “being able to get out and go eat,” Judy said.

James advised everybody to get their shot.

“If not, for your own protection, for everybody else’s,” Judy added.

Whitney hopes to travel, should things go back to normal.

“I lost my wife in December of 2019,” he said. “So, I’m by myself and I’m willing to get some of my bucket list things completed. … I feel extremely confident that I will be as well protected as I possibly can.”

Another recipient, Quincy Favors, has already had the virus. She ended up in the intensive care unit.

“I just pray that nobody has to go through what I went through,” Favors said. “You’ve got so many people, they really don’t believe that they can get COVID. But it’s real. And I just wish young people would realize that as well.”

Favors is looking forward to spending more time with family.

“We’ve been isolated for so long. It would just be good to just get out and enjoy life again, like you used to,” she said. “Get together with family members and, and have a little fun … birthdays, Thanksgiving, Christmas, New Year’s, we didn’t get a chance to do that this time.”

Masters worked the phones last weekend to call people back who had filled out the form. She said it was the best two days she’s had since the pandemic started.

Between the hours of 5 a.m. and 6 a.m. Friday, an unknown man entered the Wendy’s store on Lafayette Parkway... read more