Troup asks legislature to change structure of elections board 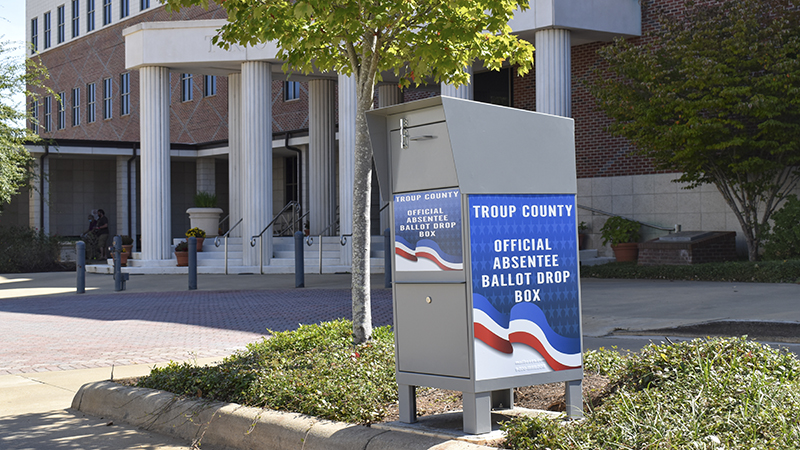 The Troup County Board of Commissioners unanimously approved a resolution asking the state legislature to reform the county’s Board of Elections. The resolution formally asks Troup’s delegation of state representatives and senators to support the reforms.

If adopted by the legislature and signed by Gov. Brian Kemp, the Troup Board of Elections will consist of five members, appointed by a majority vote of county commissioners, down from the current seven-member board.

“It keeps the experience gained on the board intact,” County Attorney Jerry Willis said at the meeting. “So, the board won’t be replaced all of a sudden, with three or four new members who have no experience.”

A quorum of the Board of Elections would require a majority (three members), and so would any affirmative votes.

Commissioners approved the motion unanimously. The current structure of the Board of Elections has been in place since 2012. If approved, the new structure would take effect at the start of 2022.

Commissioners and the county manager want to reduce the number of members because they hope it will increase efficiency on a board they feel has been dysfunctional in recent years.

Board of Elections Member Lonnie Hollis voiced concerns about the proposal, saying it was tantamount to voter suppression. She has no issue with reducing the number of members but said it would lead the Republican-controlled Board of Commissioners to appoint a politically homogenous Board of Elections.

“You’re going to pick whoever board members that you want,” Hollis said.

“So, you don’t trust us to do the best for the county?” Commissioner Lewis Davis asked.

However, Commissioner Richard English, Jr., the sole Democrat on the Board, did not express any concerns, and voted in favor of the resolution.

Commissioner Morris Jones argued that it was only a resolution, and that the state legislature would have the final say.

Georgia voters do not register as party members, but in the 2020 election, 60.4 percent of the Troup County vote went to Donald Trump and 38.5 percent went to Joe Biden.

Chairman Patrick Crews said commissioners would appoint a board that reflects the county.

“We know that we’ve got to pick a representative group of citizens from Troup County,” Crews said. “We want it to be a bipartisan board.”

“It is the county board of elections, and the county funds their staff, supervises the staff, houses them, and if anything does go wrong, the county is ultimately on the hook for any sort of liability,” Thornton said in an interview. “So, to me it does make sense for the county to have to have charge of the elections process.”

West Point Mayor Steve Tramell said he doesn’t have a problem with his city losing the power to appoint a member, as long as they are still heard.

“As long as we feel like the City of West Point is represented, and the [city] council’s OK with it, then I’m okay with it,” Tramell said in an interview.

Hogansville Mayor Stankiewicz said he doesn’t have much of an opinion about the board’s composition. He just hopes the county’s appointees take a nonpartisan approach.