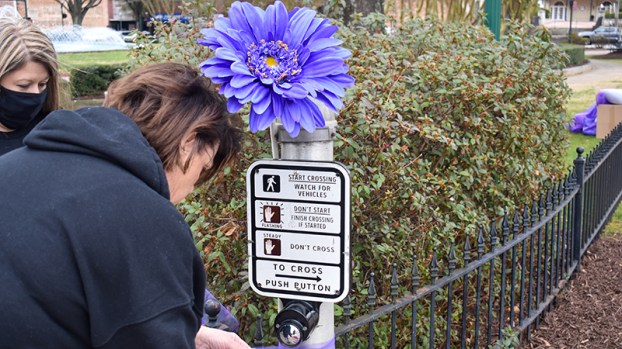 Relay for Life is kicking off its 2021 campaign on Feb. 4, World Cancer Day, and volunteers with the Troup County chapter were out decorating Lafayette Square on Monday.

Because of COVID-19, the chapter hasn’t held a proper relay event since 2019. There’s hope that such an event will occur later in the year, but for now, local volunteers are focused on spreading the word about Thursday’s kickoff event.

Mother-daughter duo Karen and Alex Smith serve as co-chairs of the Troup chapter. They decorated the square with lawn signs and bows to raise awareness of the organization’s fundraising efforts.

“They’re [Relay for Life] not allowing any in-person things right now, so we’re doing a virtual auction,” Karen Smith said. “We’re hoping that maybe July of this year, we might be able to do regular Relay for Life.”

The Troup chapter usually draws about 43 teams, ranging in size from “5 to 12 people a ream, or more,” according to Karen Smith.

Each team, many of which are affiliated with a church, school or business, raises money as a team, sometimes holding fundraisers. A few days before the relay event, they usually assemble for a “bank night,” where each team submits their money at a local bank.

Last year, the Troup chapter sought to raise $100,000, and came up a few thousand short.

“We were just shy of that, which is crazy with it being 2020, and fundraisers and things being low,” Alex Smith said.

Volunteers are working to put up signs and purple ribbons around town at homes and businesses who request it.

Some signs read, “In an unsure year, we’ll still have Relay this year.”

Alex Smith said the Troup chapter hopes to have some small, safe pop-up events. On Friday night, from 5 to 9 p.m., Sweetland on Ice will be having a sponsorship event. Proceeds of ice skating tickets will benefit the Troup chapter.

Alex Smith first got involved through her church, Baptist Tabernacle LaGrange. She was also inspired to join because her grandmother survived breast cancer.

“Just growing up with that, and just knowing the pain that she went through, and her caregiver as well, just kind of sparked an interest in me,” she said.

Connecting with others who are affected by cancer is a powerful feeling for Alex Smith. Just the other day, she spoke on the phone with a woman who was recently diagnosed with breast cancer.

Smith asked if she could put a purple bow on her door.

“She cried, she [said] ‘This is why we do this. … I’m so glad you reached out.’ And it’s stories like hers, that want to find that hope, that cure, that’s what we do it for,” Alex Smith said.

Chattahoochee Riverkeeper is once again finding new ways to prevent trash in the water ways.  After receiving support from the... read more