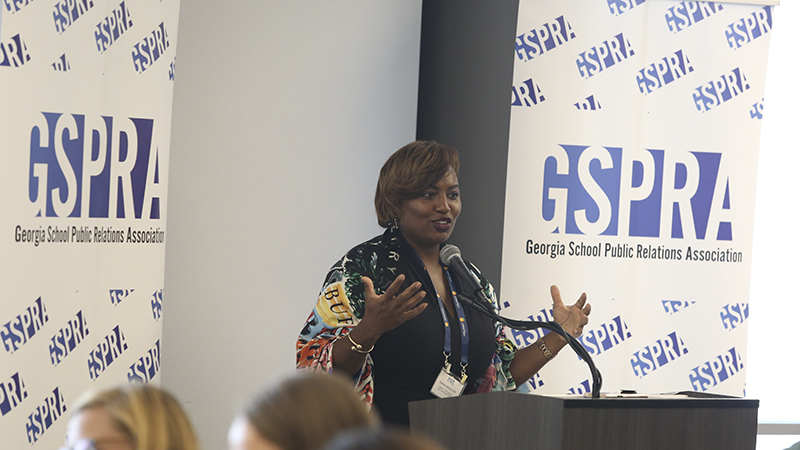 Above, Yolanda Stephen speaks at a GSPRA event before the pandemic.

Stephen received the Anne Raymond Distinguished Service Award at the organization’s virtual awards ceremony last week. The award honors a GSPRA member for their “commitment and dedication to the organization and to the profession” and is given to a member who “has gone above and beyond the call to support GSPRA and GSPRAns.”

In an interview, Stephen said GSPRA has been influential in helping her advance public relations tools for TCSS. Conversely, she also shares information about the district’s efforts with other PR professionals around the state.

Stephen thanked TCSS Superintendent Brian Shumate and his cabinet, saying they have been “phenomenal” in their support of her work.

In regards to her job itself, Stephen said she’s perhaps best known among TCSS parents for communicating inclement weather plans.

“Most people know me as the snow day lady,” Stephen joked. “But it goes way beyond that.”

Her job includes sharing what the school system is doing to improve achievement and communicating internally — with educators, bus drivers, custodians — and externally — with parents, students and business partners.

GSPRA has helped provide professional learning conferences to members so they can better communicate with the public and with district employees.

In the past, GSPRA has provided professional learning on marketing, video technology, social media, communications and crisis communications.

“When you think about all of the graphics that you see that come out from [TCSS], we talk about those across the state,” Stephen said. “So, they’ve been able to really help and bolster the professional learning that I have in my specialized career.”

Stephen served as president of GSPRA last year and is now the vice president of diversity engagement for its parent, the National School Public Relations Association.

Before coming to work at TCSS, Stephen worked in communications for Goodwill Industries of the Southern Rivers, out of Columbus. Before that, she did a seven-year stint in corporate PR for Aflac. She started her career as a flight attendant.

Stephen isn’t just the mouthpiece for TCSS, but also a mother of two students — Herman, 11, a sixth grader at Gardner Newman Middle and Ananda, 18, a senior at Troup High.

Being a parent and having backgrounds in corporate and nonprofit PR give her a valuable perspective, she said.

“That makes a difference in the way that we communicate here in [TCSS] because I know what it’s like to have kids in school, and not be in education, and not understand the language,” Stephen said. “So, coming into the position, I can really make the language more readable, for our parents and our students, more understandable.”

Stephen’s favorite aspect of the job is going out to see and work with students.

“Being in the classroom, taking the photos, asking the questions, learning the background stories of our students, our staff is the best part of my job,” she said.

She decided to move to education after her husband died as it better fit her schedule as a mother of two. She had a friend working at TCSS and thought it sounded like a good fit.

“There is no question this is definitely a perfect fit for me,” she said.

“I’m glad to be here in Troup County. I find that it is a place that’s welcoming and open to different ideas, and I’m just happy to be here.”