Adding some color: LaGrange to add multi-colored lights to fountain 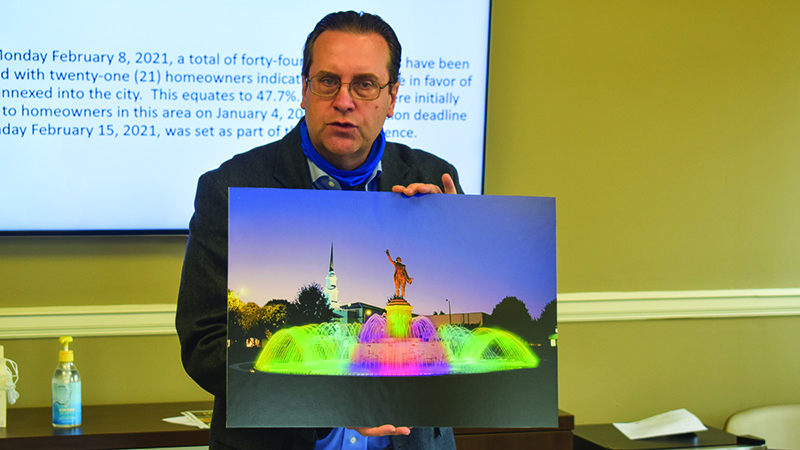 The LaGrange City Council unanimously approved the allocation of approximately $310,000 to make repairs and add multi-colored LED lights to the city’s iconic fountain at Lafayette Square at Tuesday night’s council meeting. The project will be paid with SPLOST funds that are earmarked for parks.

In the past, the city has added dye to the fountain for certain events but has ended the practice. After the dye had been cleared out, it would leave stains on the marble, causing the city to drain the fountain and pressure wash the marble.

Skip Smith of Smith Design Group gave a presentation about the fountain at the work session. Smith worked with Shannon Gavin Johnson of the Troup County Archives to research the history of the fountain.

In a way, Smith said, this project would restore the original look of the fountain, which had multi-colored lights in the past that were later switched out with white incandescent lights. Smith passed out 50-year-old postcards from his grandfather’s drug store showing the fountain’s original, colorful look.

“There is some work that’s going to have to be done,” Thornton said at the work session. “Because the lighting that’s there now is failing and those bulbs cost $1,000 apiece.”

The project would add 56 new LED lights. The lights are dimmable and can change color with the push of a button. Smith said the project should not take more than six months.

Per Smith, the large plaque at the northeast corner of the grass circle opens up to a ladder that leads 12 feet underground. The ladder leads to a 60-foot hall to the center of the fountain.

The ladder and some underground panels need replacing, Smith said. He said the city should also install a cooling system and dehumidifier in the underground area to control humidity and lessen the wear that it causes on the fountain’s components.

The city put out a bid for the project and received two responses. The cheaper one was from JHC Corporation for about $316,000. The city worked with JHC to get the price down a bit. Of the estimated cost of $310,000, $20,000 is for contingency costs.

Smith acknowledged that some people may believe the city has more pressing matters to attend to, but he also pointed out the fountain’s importance as an icon of LaGrange, and its use as a tourist attraction. City Manager Meg Kelsey spoke about the fountain being the “focal point of our community.”

“This is not a need per se, but from a visitor standpoint and tourism and just a general community standpoint, I think it’s important that we maintain this fountain that has been around for over 72 years,” Smith said.

Thornton mentioned its importance as a meeting place, calling it the symbol and heart of LaGrange.

Councilman Nathan Gaskin suggested adding solar panels somewhere around the square to power the fountain. Thornton said that could be explored in the future. Gaskin also said lighting upgrades were needed in other areas.

“I love the idea. I just don’t want to lose sight that there’s some other areas that need lighting as well, in the city, such as Greenville Street Bridge,” Gaskin said.

Councilman Jim Arrington asked whether the lights would be visible in daytime. Smith said no, and that the city would turn them on around dusk.

Councilman LeGree McCamey was concerned about excessive requests from citizens asking for the lights to be a certain color. Kelsey had earlier said that “It seems like every week, we get a request to [dye] the fountain a different color.”

Thornton said Kelsey would need to come up with some sort of criteria to determine what warrants a color change.

The fountain was dedicated in 1949 before an audience of thousands, Smith said. The original construction cost $75,000, about $761,000 in today’s dollars.

“One afternoon, I heard a couple of ladies from out of town walking through the square, [saying] ‘Aw, this is beautiful, it reminds me of Savannah,’” Smith said. “And I was sitting there thinking, ‘Yes, it does. But Savannah has almost 40 squares, we only have one. So, we need to make it the best we can.”