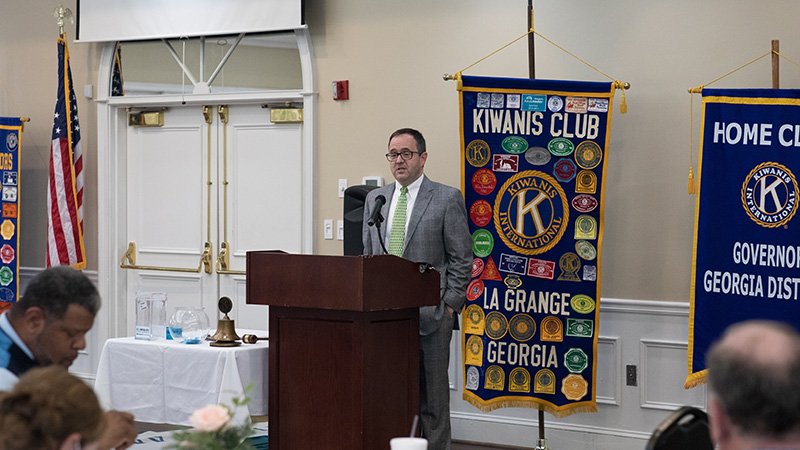 LaGrange Mayor Jim Thornton gave a preview of his annual Mayor’s Update to the Kiwanis on Thursday afternoon.

Thornton will give the full official 2021 State of the City in March during the LaGrange-Troup County Chamber of Commerce Early Bird Breakfast.

Most of the focus for the speech was what the city has accomplished during COVID-19, where the city is going and how positive initiatives can be sustained.

“We have a lot of things going for us, but we’re inspired because nobody is that interested in where we are today,” Thornton said. “The question is where are we going? The question is are we getting better, or getting worse? The question is what does the future hold and that is what we’ve been doing at city hall for several years now — we’ve been trying to think about the question from a forward-looking perspective.”

Thornton noted in his update that many projects continued that were underway before the pandemic. He added that some have restarted as well after a long pause.

“You’ve heard me say this before whenever I talk about what goes on at the city,” Thornton said. “I always couch it in three key terms. The first is investment … no one can actually make any meaningful change overnight. Nobody can solve every problem overnight but what we can do is we can make strategic investments that improve the quality of life in the community.”

Thornton said it’s not about just spending money, avoiding a problem or even avoid talking about a problem. Instead, he said the city looks at what investments need to be made to make things better.

The eighth segment will continue the trail from Southbend Park to the Callaway Memorial Clocktower. The segment is being broken down in two phases. Phase one will take the trail to Kex Mill on Leeman Street where there will be a bridge across the creek.

“Sometimes I think the Callaway Clock Tower is one of the most underutilized beautiful space in our community,” Thornton said. “I am excited to have a trail connected to there.”

Thornton also spoke about the housing industry and where it is going in the community.

“We have a demand that exceeds our supply,” Thornton said. “There are a number of factors that have accelerated that trend.”

Multiple apartment complexes have recently been built in LaGrange, including The Lofts at Dixie Mill and The Yard on Mill. The Exchange at 1105 is currently under construction but is expected to be completed this year.

“The city can’t build houses, we don’t own houses, and we don’t own apartments,” Thornton said. “It’s not what we do but we can support development. The primary way to do that is in water and sewer expansions.”

Five additional sworn officers are expected to be added to LPD police force, according to Thornton.

Thornton said he is optimistic for 2021 and that the city is committed to making it through all challenges that the year may bring.