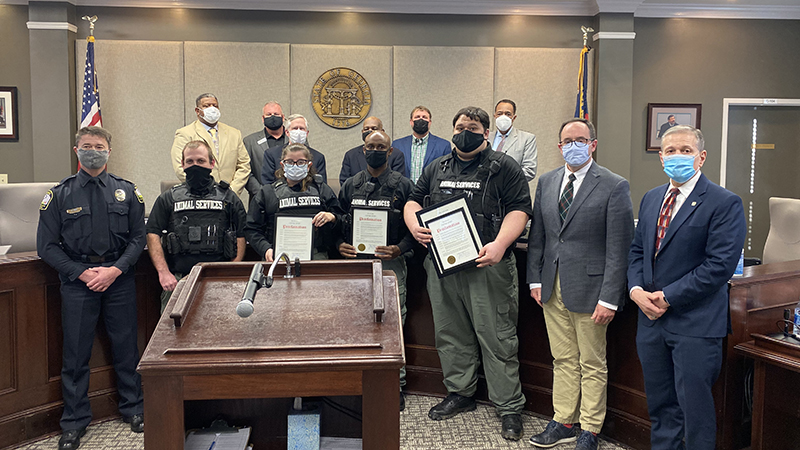 The city of LaGrange honored the LaGrange Animal Services Tuesday night for reaching some major milestones.

“They’ve been recognized by the Atlanta Humane Society, and they’ve received a grant for some work that they’re doing,” said Mayor Jim Thornton. “They continue to do great work with the puppy pipeline.”

“These are great accomplishments and achievements for a four-member staff,” Thornton said.

Thornton read a proclamation to the staff that spoke highly of the shelter’s passion to save and rehome cats and dogs.

“Every year, shelters in the United States are killing millions of animals who could be saved and are also killing millions of free living animals who do not belong in shelters,” Thornton read from the proclamation. “Whereas lifesaving change will only come about only if no kill programs are embraced and further developed. And whereas the LaGrange Animal Services has received a $10,000 grant distributed by the Atlanta Humane Society, to help save more animals.”

Thornton commended everyone on staff for the endless hours they put in for providing a safe space for animals in the community.

Dekmar said when he began at LPD 20 years ago the shelter was called animal control and had more than 5,000 animals that were euthanized every year.

“To see that number drop to the level where we’re declaring it a no kill shelter is remarkable,” Dekmar said. “Chris and his team are called upon around the state for their expertise in developing processes that they have. I’m very proud of their work and appreciate the efforts that Capt. Mike Pheil has been involved in to give them the support they need.”

The LaGrange Animal Services building is at 1390 Orchard Hill Road in LaGrange.

Animal Services can be reached at (706) 298-3606 or via Facebook at www.facebook.com/CityOfLaGrangeAnimalShelter/.