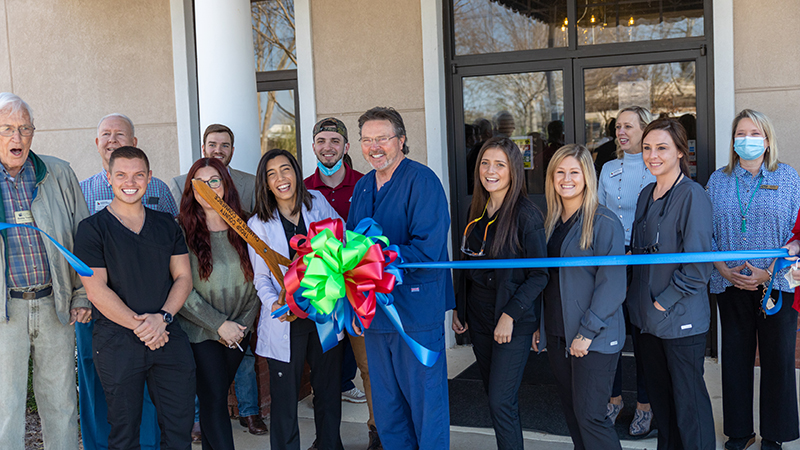 The Refresh Me Center celebrated a grand opening Thursday morning to introduce the public to its doctors and staff.

The center is an adult and children’s dental practice with a salon and med spa.

“I decided that the same people that want to be healthy, as far as their mouth is concerned, are the same people that like to take care of their body and their appearance,” said owner Dr. Chuck Pitts. “We have a common reception area and multiple people in their fields working in the area.”

Pitts said he has devoted hundreds of hours to continuing education to perfect his craft in cosmetic dentistry. He also is entering his 39th year of practicing dentistry.

Pitts said the business was growing so rapidly, they recently hired on Dr. Deema Raslan, who specializes in preventive and cosmetic dentistry.

“Her resume was the most impressive of all the candidates that I saw,” Pitts said. “That really peaked my interest. After meeting her, our values about quality care and being more focused on what’s best for the patient rather than the money were just very congruent.”

Pitts also opened and co-owns Kid’s Zone Dentistry, which started almost a decade ago when the housing market crashed.

“I started looking around in the community about other areas in the dental world that we could serve and be busy and children were grossly underserved,” Pitts said. “There were very few dentists that accepted Medicaid for the kids. We began blocking out one day a week for kids and at the same time, I wanted to be different than most Medicaid offices. I want to treat those families with respect.”

Pitts said many families on Medicaid were treated with disrespect and not always given quality care. Shortly after that idea took off, he was able to create a separate dentistry just for kids with Dr. Joel Pritchett.

Pitts said after Pritchett came on board, he was able to focus on his adult dentistry practice and added the spa to it as well.

Raslan was born and raised in Abu Dhabi and graduated from the University of Sharjah with her Bachelor of Dental Surgery (BDS) in 2017. Upon her arrival to the United States, she attended the University of Boston and graduated with her DMD (Doctor of Dental Medicine) in 2020. Post-graduation and pre-pandemic she relocated to West Central Georgia to be with her husband, Omar Raslan, and begin her career in preventive and cosmetic dentistry.

“Dr. Pitts asked me to come and shadow and when I came to shadow I fell in love,” Raslan said. “We learned in school in 101 dentistry where everything is perfect and everything is by the book. Then we were told that we shouldn’t expect to find that in other dental practices because everyone just works for the money or everyone works to get things done.”

When Raslan came to Refresh Me, she said that was the opposite case.

“When I was shadowing him, he was doing exactly what we learned at school,” Raslan said. “I want to be here to learn and do the things I believe are right.”

Along with a dental team, Pitts also has a team that focuses on spa treatments, Botox, fillers and CoolSculpting.