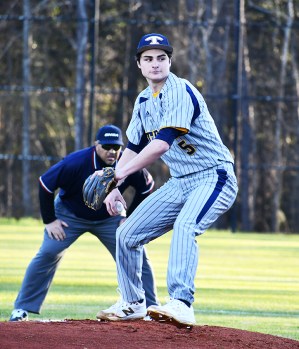 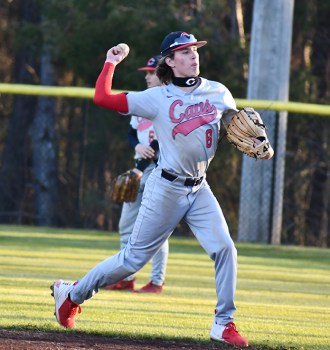 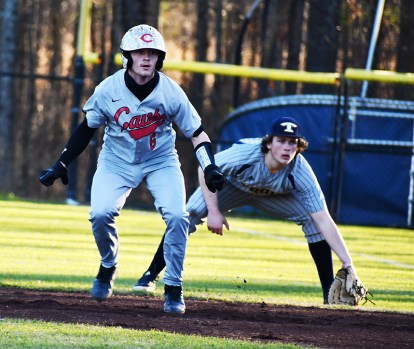 The pitching has been exceptional for the Troup Tigers, and Colton Webb has enjoyed the best seat in the house.

Webb is a senior catcher for the Tigers, and he has been behind the plate for each of the team’s seven regular-season games.

Troup (6-1) has won six of those games, including five in a row, and some lock-down pitching combined with a stellar defensive effort has been the key to the success.

That trend continued on Wednesday, with Devon Murphy and Daniel Martin combining for a three-hit shutout in a 4-0 victory.

“It’s really fun being back there when you’ve got pitchers who get ahead, throw strikes, can throw off speed for strikes, pitch to contact,” Webb said after Wednesday’s win. “And you see our defense. Our defense is really good.”

The Tigers did all of their scoring during a four-run fourth inning, with Josh McDonald and Brett Haynes coming through with back-to-back two-run singles.

The Tigers didn’t score again, but they didn’t need to thanks to the effort of Murphy and Martin.

“Devon did not have his best stuff. He battled, and gave us what we needed,” said Troup head coach Tanner Glisson. “Daniel came in and had really good stuff. And we keep getting timely hitting.”

Glisson is grateful to have Webb manning the all-important catcher position.

Webb is also a key member of the lineup, and he was in the leadoff position on Wednesday.

“It’s huge having him,” Glisson said. “It’s really good for me as a first-year head coach here to have a veteran like that behind the plate that can be the game manager.”

Troup opened the season with a doubleheader split with Northgate.

The Tigers haven’t lost since then, and Webb said the players have approached every game with plenty of urgency after what happened last year when the season ended early because of COVID-19.

“Last year being cut short, we never knew when it was going to be our last game,” Webb said “We come out this year and act like every day is our last day. We just play as hard as we can.”

Troup will look to finish a perfect week with a home win over Glenwood on Friday, with first pitch set for 5 p.m.

For Callaway, the loss was the first hiccup in what has been a fast start to the season.

The Cavaliers opened the season with three straight wins before getting shut down by the Tigers.

Callaway will look to begin a new winning streak when it hosts Westminster on Saturday, with the doubleheader starting at noon.

In Wednesday’s game, Callaway’s Justin Moore and Murphy were locked in a scoreless pitching duel for three innings.

Martin entered the game in relief and set the Cavaliers down in the top of the fourth, and the Tigers went to work in the bottom the inning.

Ethan Morton got the four-run rally started with a double, and Reed Morris and Tre Mosley reached on base hits to load the bases.

McDonald stepped to the plate and singled to right field, and Morton and Morris scored to give the Tigers a 2-0 lead.

Next up was Haynes, and his base hit brought in Mosley and courtesy runner Dwartney Wortham, and the Tigers led 4-0.

Moore got back-to-back strikeouts to end the inning, but the damage had been done.

The Cavaliers were unable to mount a comeback against Martin, who retired 12 of the 13 final batters he faced over the final three innings.

Martin was also aided by an inning-ending double play in the top of the fourth.

Mosley finished with three hits for the Tigers with a double, McDonald and Haynes each had a hit and two RBIs, Morton had a double, and Morris and Murphy each had a hit.

“We still have a lot of stuff we’ve got to improve on, but I like the makeup of this team a lot,” Glisson said. “I’m really proud of them.”

For Callaway, Andrew Locke, Kaden Rogers and Tucker Starling each had hits.

Moore pitched four innings for Callaway and gave up six hits and four runs, and he had eight strikeouts.

Starling was terrific in relief for the Cavaliers with two scoreless innings, and he had five strikeouts.