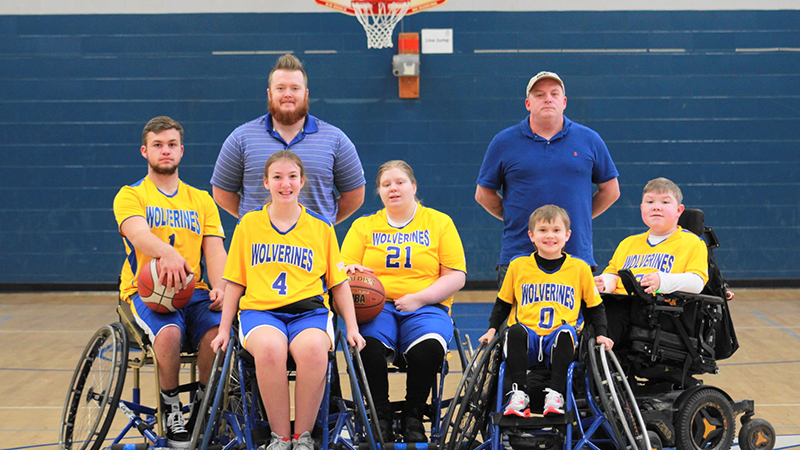 They’re hoping to finish in style.

The West Georgia Wolverines wheelchair basketball team will wrap up their season by playing for a state championship on Saturday at 1 p.m., and the game will be played in LaGrange High’s new gymnasium.

There will be a semifinal game at 11 a.m., and the Wolverines will play the winner for the championship.

The Wolverines have made it to this point in the season without a loss, and if they continue that trend on Saturday, the players and coaches will get to celebrate a state title.

“The teams that are playing, we’ve played them before, but you play any team in the regular season, it’s a hard game, and once you get to the championship game, it’s a whole different level,” said Jacob Roche, the Wolverines’ head coach. “The game elevates, but we’re ready.”

The Wolverines have been around for years, but this is the first year they’ve been affiliated with LaGrange High School.

In previous years, the home base for the Wolverines was the Roosevelt Warm Springs Institute for Rehabilitation in Warm Springs.

Last year after the team’s connection with the institute ended, the Wolverines were seeking a new home.

Logan Wegienka, a long-time member of the Wolverines and a 2020 graduate of LaGrange High, met with LaGrange athletics director Mike Pauley about moving the team to the school, and it soon became a reality.

The Wolverines began practicing last fall and played their first game in January, and they’ve been rolling along nicely since then.

One of the team members is Abby Simmons, a junior at LaGrange High, and she’s grateful that she’s been able to continue playing for the Wolverines after some uncertainty last year.

“When I first started doing, I got in trouble a lot,” Simmons said. “It helped me change my attitude. So, I wanted to keep it going. That was really important for me.”

Simmons, along with Troup High senior Mason McCartney, is one of the team’s veterans, and she has enjoyed helping some of the new players make the adjustment to competitive wheelchair athletics.

“It’s fun trying to teach them what I know,” Simmons said. “Logan taught me everything that I know, and I like to be able to help them grow as a player.”

While some of the players have been competing for years, this is all new for other team members, and Roche has enjoyed watching them develop and find their confidence.

One of the new players, Long Cane Middle School sixth-grader Jackson Ward, has made tremendous progress since practice started.

“When he first got here, he wasn’t used to the chair, or dribbling at all,” Roche said. “And then we added Tyler (Smith) from our first game, and he’s made a lot of strides, just never playing any sport to becoming one of our leading scorers with Abby. And Bailey (McCartney) has made a few shots in games, and when she started, she couldn’t even hit the basket.”

Kristy Prater, Logan Wegienka’s mother and the area coordinator for the Wolverines, gives a lot of credit for the improvement the players have made to Roche, who jumped head-first into his position.

“He was the perfect fit,” Prater said. “For someone that hadn’t been around this a lot, he came in that first practice and he’d already been studying videos, and learning how to teach them basic things that even Abby who’d played for a few years didn’t know, because it had never been taught. So right off the bat, I knew this is going to work, this is going to be a good fit.”

Another assistant coach is Scott Cochran, who has a personal connection to the organization.

“Scott’s son played for the Wolverines, so I knew they wanted to help out and be a part of this, too,” Prater said. “It was another perfect fit.”

Prater is grateful the team members have the Wolverines in their lives.

Prater knows how much it meant to Logan Wegienka to have wheelchair sports to lean on after he was left unable to walk following a car accident, and she and her son wanted to make sure other students had the same opportunities.

“With Logan, it was a complete game-changer for him, and it has been for these kids, all of them,” Prater said. “(Wegienka) played with Abby and Gavin, and when this team disbanded in December, he was like, I can’t leave for Texas and then we went to Pauley immediately and said, what do we have to do?”

After basketball season ends, the Wolverines will make the transition to football, and they’ll start practicing that sport next week with the season starting in March.