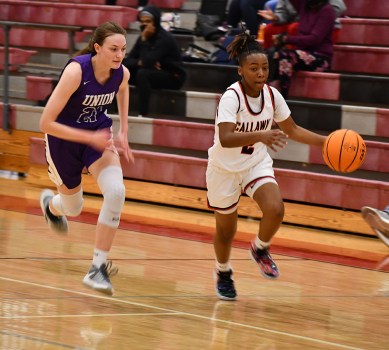 The streaking Callaway Lady Cavaliers will look to keep their season alive when they host Chattooga on Saturday in the second round of the Class AA state tournament.

Callaway, which has won six games in a row and eight of its past nine, thumped Union County 72-45 in the first round of the state tournament.

Next up for Callaway will be Chattooga, which finished second in Region 7-AA and beat Pace Academy 62-29 in the first round of the state tournament.

“They’ll play hard. They’re scrappy,” Callaway head coach Deyano Martin said of Chattooga. “We’ve got to do a better job of boxing out, getting rebounds.”

Callaway (14-6) has only lost one game in the past month, and it won the Region 5-AA championship with a road win over Heard County before dispatching Union County.

Junior Camryn Stargell, who teams with Thomas to give Callaway a formidable presence in the post, added seven points.

It was, Martin hopes, the first of five games Callaway will play in the state tournament.

With one state win under their belt, the Lady Cavaliers need to win three more times to advance to the state-championship game in Macon.

“I told them it’s a five-game season,” Martin said. “We took one step. Each step is getting tougher and tougher. We’ll have to be ready to go.”

WHAT: Second round of Class AA state tournament

UP NEXT: The winner will play Washington County or Laney in the third round