LaGrange firefighter is serving beyond the fireground 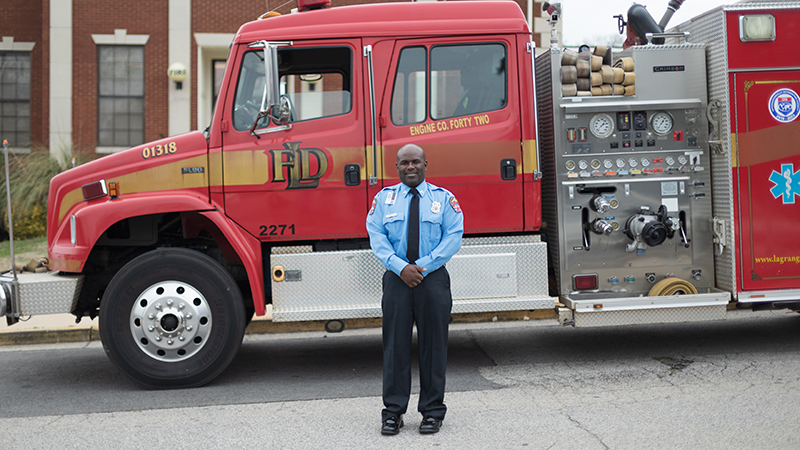 Although firefighter Sergeant Chris McGhee is quiet and humble, he’s made a major impact on the LaGrange community.

After graduating from Troup High School, McGhee immediately applied to be a LaGrange firefighter at the age of 19. Now 30 years later, McGhee is still serving the community with the same passion he did when he first began.

“When I was a kid growing up, I always dreamed about being a fireman or policeman, and the opportunity came when I was graduating from high school,” McGhee said. “I put in my application and when I joined I really enjoyed it. I was placed with a great group of guys that really taught me a lot growing up and I see them as a second family now.”

He said when he first started he didn’t a lot about the fire service.

“When I came here I was clueless,” McGhee said. “I was looking for a job and I knew I wanted to be a fireman, but I didn’t know all the things that entailed. I faced a lot of adversity with that. I was also afraid of heights and had to overcome that.”

McGhee has completed his smoke diver certification, was a member of the Fire Department Muster Team and received several certifications from the Georgia Fire Academy. He was also promoted to sergeant in 2007.

“I take pride in serving the community with the kids and mentoring children,” McGhee said. “I want to be there for them. There are things I see in them growing up that I can relate to. Some kids in this community don’t have fathers in their life, and I can relate to that. If I can help change the world for one or two kids then that’s all that matters.”

McGhee is actively involved with the elementary schools in the area and volunteers his time to read to students as well.

“He’s looked upon by some of the some of us that haven’t been here that long as an example on how to volunteer yourself and your service and your abilities to the less fortunate,” said LFD Lt. Brandon King. “It’s something that’s highly revered here at the fire department because our job is service in nature.”

King said that McGhee has a servant’s heart by nature and that just Friday morning McGhee offered to help a homeless man to replace his broken bike with a bike of his own.

“Sgt. McGhee is just a great employee that always does the right thing,” said LFD Chief John Brant. “He has been dedicated to our department for over 30 years and loves what he does. He really cares for the citizens we serve. He is the type of person that does the right thing and does it for the right reason. He doesn’t look for a pat on the back for helping others. In the last year, he went back to EMT school to be an inspiration to the younger employees and to improve at his job. That is just how Sgt. McGhee is; he is a true leader that we are truly lucky to have on staff.”

In the past 30 years, McGhee has seen the LaGrange Fire Department advance in technology and different 911 calls.

“When I started, it was mostly house and car fires we responded to,” McGhee said. “You run more medical calls now than we did versus back in the day. Public education helped with that because there aren’t as many fires anymore.”

McGhee has also taken several leadership classes and promotes growth and development within the department.

He enjoys helping others and teaching the new firefighters all aspects of the fire service.