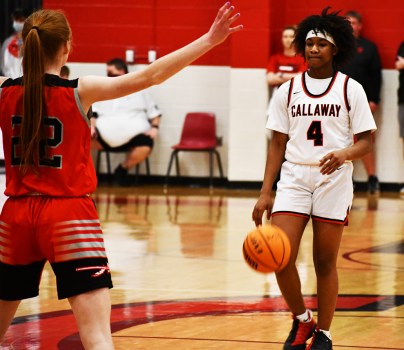 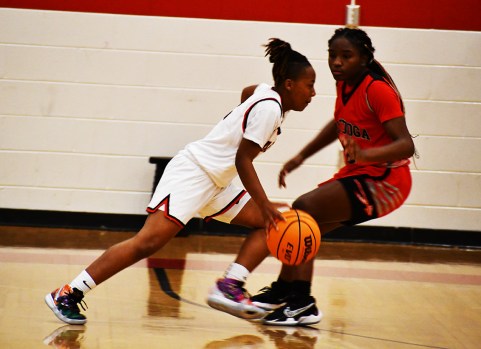 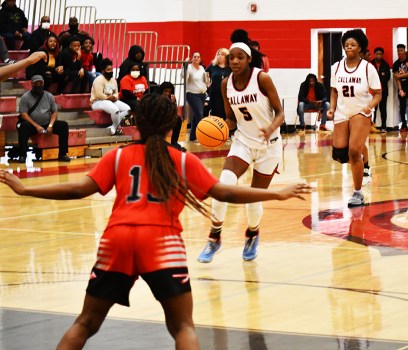 There was no hesitation.

Callaway’s Niakoe Burks knew what the situation called for, and she made it happen.

Callaway was trailing by two points in the closing moments of Saturday’s state-tournament showdown with Chattooga County when Burks ended up with the ball in her hands following a missed free throw, and she streaked down the floor and flew by a handful of defenders and made a game-tying layup.

After Chattooga missed a desperation shot at the buzzer, Callaway dominated the four-minute overtime period to win 66-61 and advance to the third round of the Class AA state tournament for the first time in the history of the program.

Callaway will host Washington County at 6 p.m. on Tuesday, with the winner advancing to the semifinals.

“It feels amazing,” said Burks, whose layup with four seconds left in regulation tied it. “It’s our first time ever doing that.”

Callaway was trailing by two points when Chattooga’s Ella Hurley missed a free throw, and Keiyunna Maddox came down with the rebound and handed the ball to Burks.

Burks raced down the court, and she laid the ball in off the backboard. The ball rested on the rim for a few moments before falling through, and the game was tied 54-54.

An alert Burks got back on defense and helped contest a shot at the buzzer that wasn’t close.

“I’m glad she got the ball, because she’s one of the fastest on the court,” said Callaway head coach Deyano Martin. “She went straight to the basket.”

Burks had been instructed to go hard to the basket if she got the ball, and that’s what she did.

“(Martin) just said go straight to the basket no matter what happened, and I just went in,” Burks said. “I was just happy it went in. I thought it was going to miss. It kept spinning and spinning.”

The Lady Cavaliers broke it open in overtime, scoring the first seven points to make sure there weren’t be any suspense.

Callaway led by as many as nine points in overtime before Chattooga made a 3-pointer at the buzzer.

“The girls did a wonderful job of holding their own,” Martin said. “They fought to the bitter end, and they pulled it out in overtime.”

Junior guard Gabrielle Johnson, Callaway’s leading scorer this season, poured in 20 points against Chattooga, and 19 of those points came in the second half.

Burks also scored 11 points, with nine of her points coming in the second half, and junior post player Camryn Stargell scored six points and did a phenomenal job of making an impact in the paint.

“Camryn, she tipped some balls, she kept some balls alive,” Martin said. “She played her position. She changes the whole game. I was proud of her.”

That the Lady Cavaliers would be in position to possibly win the game was very much in question after they fell behind 30-16 at the half.

Chattooga led 18-14 after the first quarter, and it outscored Callaway 12-2 in the second quarter to grab a 30-16 lead at the half.

The Lady Cavaliers needed to make something positive happen in the third quarter to get back in the game, and they did.

With Johnson leading the way with 10 points, Callaway outscored Chattooga 23-8 in the third quarter to seize a 39-38 lead.

“We made the adjustments to get back (on defense), rebound the ball, and play with more energy than we did in the first half,” Johnson said.

The momentum carried over into the fourth quarter, and when Thornton scored with 3:40 to play, the Lady Cavaliers had a 49-43 lead.

Chattooga hung tough and took a 54-52 lead, and it got the ball with 15 seconds left following a Callaway turnover.

A pair of missed free throws kept hope alive for the Lady Cavaliers, and Burks’ clutch basket tied it.

Burks scored with 3:05 left in overtime to give the Lady Cavaliers the lead, and they were off and running.

Thornton knocked down a jumper to give the Lady Cavaliers a four-point advantage, and they stretched the lead to seven on a 3-pointer by Johnson with 1:45 to play.

The Lady Cavaliers led by nine points on a Burks free throw with 35 seconds left, and the celebration was on.

“It’s a very big moment for us, because we’ve never done that before with the Lady Cavaliers,” Johnson said. “It was a big moment. It was amazing.”