Friends of The Thread to host races in 2022 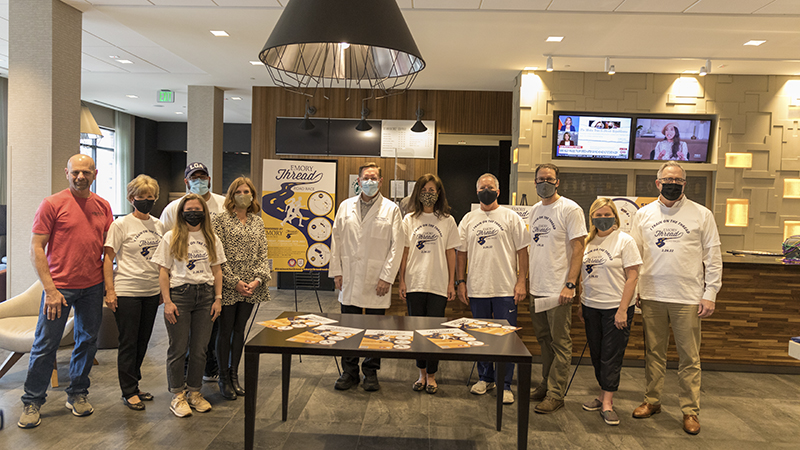 Friends of The Thread board members pose for a photo. FOTT announced a partnership with Emory of LaGrange for Thread races in 2022. --Jenna Oden

Dozens gathered Monday afternoon at the Courtyard Marriot downtown to hear the latest update from Friends of Friends of the Thread Trail.

The Friends of the Thread and Emory at LaGrange announced details of its new transformative community initiative called “I Train on The Thread” and unveiled new road races planned entirely on The Thread for 2022.

“We currently have eight and a half miles of trail system complete and the usage is really beyond our expectations,” said Friends of The Thread President Charles Metcalf. “During this past year in the pandemic, trail usage dramatically increased. Most areas have seen triple usage compared to last year.”

Metcalf said since the inception of The Thread their major goal was to encourage residents to get outside and to train in a safe environment and to do so on The Thread.

“Another goal from the beginning of this initiative was to have the ability to hold certified races and to do so safely and to do so entirely on The Thread,” Metcalf said. “That time is now.”

With the support of Emory at LaGrange, Friends of The Thread will host the Emory Thread Races on Saturday, Feb. 26, 2022, and will include three races.

The races include a one mile fun run that is completely free, a 5K race and 10K race.

The 5K and 10K are both USATF certified and will serve as a AJC Peachtree Road Race qualifier.

“When we look at that, we all have a full year to start training on The Thread,” Metcalf said. “I want to encourage everyone to go out to set new goals to get outside and to safely train on The Thread. Let’s all set some new personal goals if you’ve never been in a race. Start walking now. Be ready to walk or to run in that one mile free fun run.”

Metcalf said they decided to host the race the last weekend of February because the cutoff for the AJC Peachtree Road Race qualifier races is early in March.

“We want to allow racers who want to apply to run in that race to have the opportunity to have their best time and to submit those in March,” Metcalf said.

Registration for all races opened Monday afternoon at thethreadtrail.org.

“One of the things that we really hope to see is for you, for your family, for your neighbors, for work colleagues to come together to form Thread support groups and to be able to go into train together and to run the race together,” Metcalf said.