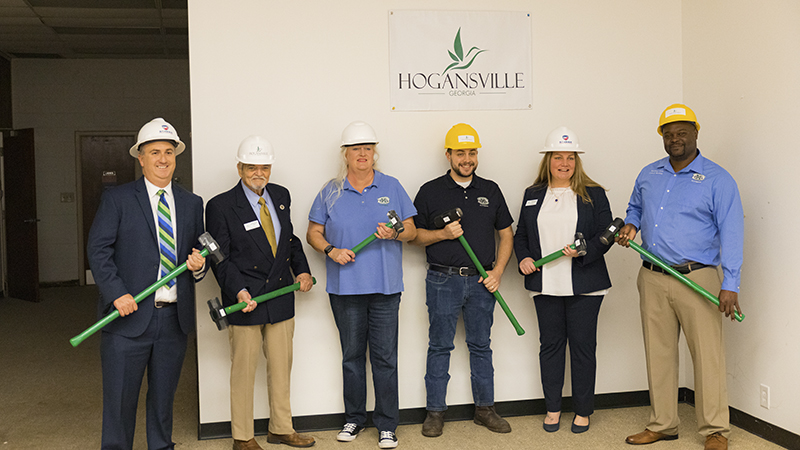 The Hogansville City Council poses for a photo with City Manager Jonathan Lynn and Mayor Bill Stankiewicz at the ground breaking of the new city hall. --Jenna Oden

After years of anticipation, the City of Hogansville officially broke ground Monday on the city’s new city hall.

The city was approved for a USDA loan of $373,000, which has allowed for the PNC Bank building at 111 high street to be renovated. Mayor Bill Stankiewicz said when the city originally applied for the loan in May, but the loan didn’t fit the city’s request, and Hogansville had to reapply. The pandemic then delayed everything further.

“The trust paid for this building when it was bought,” Stankiewicz said. “A developer, John Hardy Jones, paid to put a roof on this building, and he also contributed $50,000 toward the renovation. We anticipate, and we really believe that we will complete this project purchase and the repurposing of this building without costing taxpayers one dime. We are very proud of that.”

Renovations to the Royal Theatre, which is where city hall is currently located, cannot begin until the city is completely moved out of the building. City Hall moved into the theater in 1984, but the building needs extensive repairs that will cost an estimated $1.8 million.

With sledge hammers in hand, each city council member got to take a swing at a wall inside the old bank building.

Even a few residents joined in on the fun to take down the wall, signifying the beginning of the construction process.

During construction, all the bank teller stations at the bank will have to be removed.

The drive-thru window will remain as it will be used for citizens to pay utility bills or other city fees. Construction and renovations were expected to begin the first week of January at the latest, but delays with contractors caused the construction timeline to be pushed back.

According to the terms of the loan, the city is required to contribute $23,500.

The city hopes to be moved in by the end of the summer.