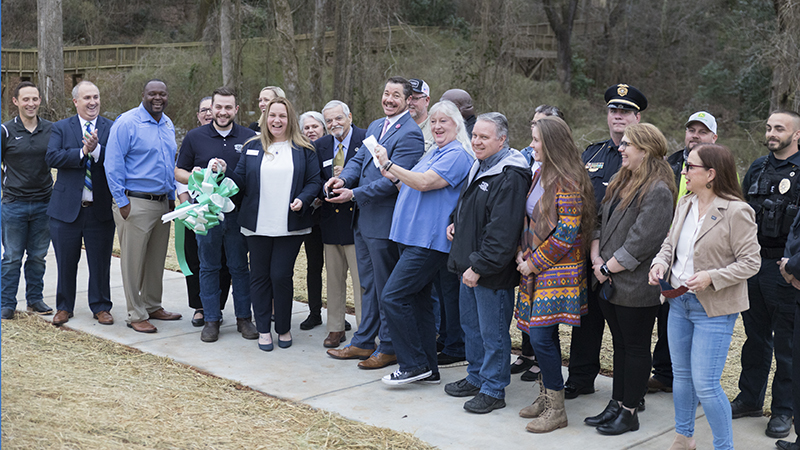 The city of Hogansville celebrates the opening of the Tower Trail extension Monday night. --Jenna Oden

Surrounded by council, chamber and city staff, Hogansville officially opened the newest connection of the Tower Trail near downtown on Monday night.

In July 2020, the city had voted to accept a bid to expand the Hogansville Tower Trail. Due to COVID-19, construction was delayed by almost eight months.

“The city of Hogansville provided funding for this trail and the Hogansville Charitable Trust provided matching funds as well,” said Mayor Bill Stankiewicz. “This is just a terrific addition to our trails program. We’re looking forward to using this trail and extending it.”

The new construction connects the Tower Trail to the new city hall and post office on High Street that is approximately a mile long. The city also received a $200,000 grant for the trail expansion from the Department of Natural Resources.

“I think it’s the kind of project that brings and makes people want to live in a city,” Stankiewicz said. “People today want recreation, and they want parks and trails. They are a real important part of it.”

Stankiewicz said the city plans on focusing on the parks and recreation in Hogansville to increase attraction to the city.

“We have some more trail work to do,” Stankiewicz said. “We have a long-term project that doesn’t connect to the Tower Trail but goes from the lake all the way across the city.”

He noted that he feels like the city keeps moving forward despite having a few setbacks from COVID-19.

“We have accomplished a lot with getting started on city hall, the trail and having new construction for homes in Hogansville,” Stankiewicz said. “We feel very good about everything.”

The council voted to approve multiple new business items, including a developer seeking a rear setback variance for a proposed 169-lot townhouse development along Williams Street and E. Main Street. The request was to reduce the rear setback from 25 feet to 20 feet due to topography, rock and an existing waterline easement on the property.

The Hogansville Planning and Zoning Commission met with the applicant and applicant engineer on Feb. 18, 2021, and voted to recommend approval of the variance request. The same developer was also approved for a preliminary plat for the proposed 169-lot townhouse development.

According to the council, the city’s 2021-2041 Comprehensive Plan calls the land in this vicinity the Interstate Character Area: “a mixed-use commercial area, which could include multifamily residential, light industrial and green space.”

The proposed multi­family was deemed appropriate.

The city also voted to approve:

– The appointment of Cheryl Comfort, Jordan Brooke Canducci and Chad Smith to fill the three vacancies on the Hogansville Historic Preservation Commission, as recommended by that commission.

– The reappointment of Ricky Thrash, Mary Margaret Ware, Carol Smith and Ellen Shellabarger, and appoint Mark Brummett to the City of Hogansville Planning and Zoning Commission.

Little progress made as county, cities near Feb. 28…