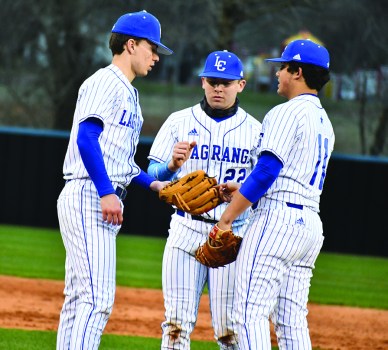 The LaGrange Grangers will open their stay in the LaGrange Toyota Invitational against a formidable opponent.

Allatoona, which is unbeaten and boasts an imposing lineup and a deep pitching staff, is one of the eight teams participating in the tournament that has been a fixture in LaGrange for more than 20 years.

The LaGrange Toyota Invitational opens with two games on Thursday at Granger Park.

First up will be Denmark, led by former LaGrange head coach David Smart, taking on Pacelli at 4:30 p.m. About 30 minutes after the first game is completed, LaGrange (3-3) will play Allatoona (6-0) in the first of four tournament games for each team.

The tournament is divided into two pools, and the pool winners will meet on Saturday night in the championship game.

LaGrange is in a pool with Allatoona, Mountain View and Smiths Station, and the teams in the other pool are Walton, Calvary Christian, Pacelli and Denmark.

LaGrange continues pool play on Friday with a game against Mountain View at 7:45 p.m. before facing Smiths Station on Saturday at 10 a.m.

“This is a really good pitching year,” Branch said. “It seems like there’s a lot of top-flight Division I pitching. So, sometimes you get the position players. This year it seems to be really strong pitching.”

The Grangers will play four strong teams during the tournament leading into the start of Region 2-AAAA play on Monday against the Columbus Blue Devils.

“We’re a little short-handed, but if we come out of it a better team, it’s worth it. That’s what we’re going to try to do,” Branch said. “No matter how we do this weekend, Monday is the most important game when we start region.”

OF NOTE: For a complete tournament schedule and list of participating teams, go to lagrangegrangerbaseball.