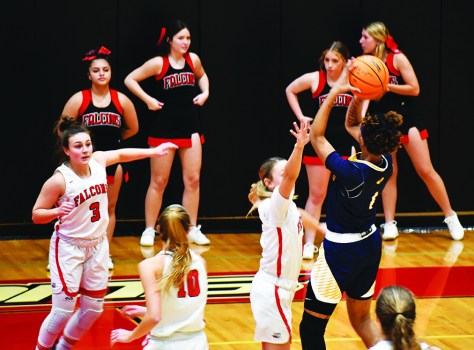 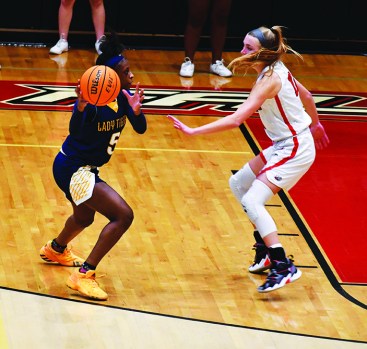 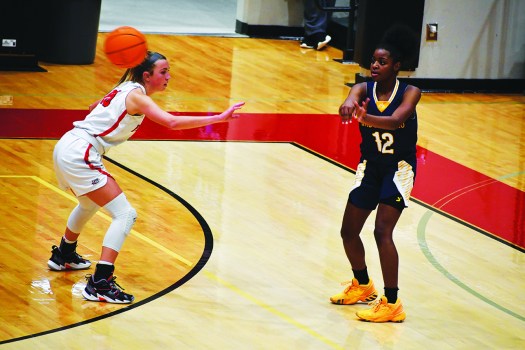 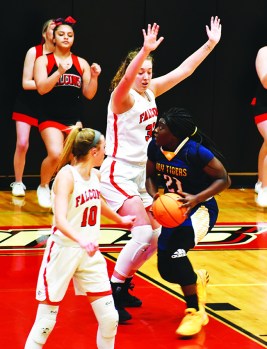 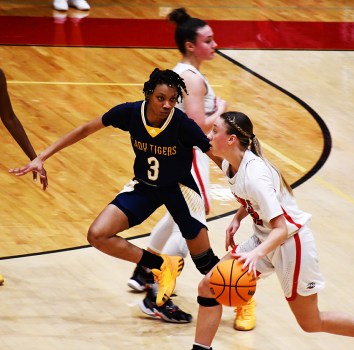 FLOWERY BRANCH – Showing the poise of a team that knows what it takes to succeed this time of year, the Troup Lady Tigers held off a determined Flowery Branch squad 49-42 on Wednesday to reach the Class AAAA state semifinals for the second straight year.

It was a tight game most of the way, with the Lady Tigers making the plays they needed to down the stretch to keep their championship hopes alive.

Troup will be on the road against Cairo in the semifinals on Friday at 7 p.m., with the winner advancing to next week’s championship game in Macon.

“They found a way to win,” said Troup head coach Carla Thornton, whose team lost to Americus-Sumter in last year’s state-championship game. “We couldn’t get any layups, couldn’t get any calls down the stretch, but we found a way to finish. I’m just proud of my girls for sticking to what we thought we could come in here and do.”

The Lady Tigers, who were clinging to a two-point lead early in the fourth quarter, appeared to have things in hand after surging to a 44-35 lead with 2:27 to play.

Flowery Branch hung tough and twice got as close as four points in the final moments, but the night belonged to Troup.

“It feels good,” said junior post player Alexcia Murphy. “I’m glad we made it. We fought the best we could, and in the end we got the win.”

On a team filled with veteran players who were a part of last year’s tournament run, freshman Angie Dowdell led the Lady Tigers in scoring with 15 points, with seven of those points coming in the fourth quarter.

Aniya Palmer added 10 points and had her typically stellar all-around game whether she was snatching rebounds, locking down on defense, or handling the ball.

Alexcia Murphy also scored 10 points and provided a strong presence in the paint, and guard Monyia Murphy scored six points and did an outstanding job defensively on the perimeter.

While Troup has plenty of star players, some of whom will likely be playing Division I basketball down the road, it is a true team, with everyone doing their part.

“Everybody gets to play, everybody contributes,” said Alexcia Murphy. “It keeps us together. It keeps us motivated.”

Added Palmer, who this week was named the Region 2-AAAA player of the year, “one person can’t win a game. It takes all five of us to get the job done.”

In a tightly contested first half, the Lady Tigers trailed 9-8 after the first quarter, and they scored the final four points of the second quarter to build a 20-16 lead at the half.

Troup ran out to a 10-point lead on an Alexcia Murphy jumper with 2:05 left in the third quarter, but Flowery Branch closed the quarter on a 6-0 run to make it a 32-28 game.

Flowery Branch scored first in the fourth quarter to get within two, but beginning with a Weldon basket with 6:09 to play, Troup went on an 8-2 run to grab a 40-32 lead with 4:14 to play.

A Shaina Kriews 3-pointer got Flowery Branch within five, leading to one of the most critical stretches in the game.

Dowdell hustled down the court after a Flowery Branch miss, and she scored and was fouled to give Troup a 42-35 lead with 2:30 to play.

Dowdell’s free-throw attempt missed the mark, but Palmer reached over a Flowery Branch player and grabbed the ball one-handed for the offensive rebound, and her put-back gave Troup a 44-35 cushion with 2:27 remaining.

Flowery Branch ran off four straight points to get within four, but once again Troup came through with a momentum-turning play.

After Monyia Murphy missed a free throw, Alexcia Murphy fought for and corralled the offensive rebound, and she scored to put Troup on top 46-40 with 1:12 to play.

Post player Ashlee Locke, who presented problems for Troup all night, scored to get Flowery Branch back within four with 27 seconds left.

Alexcia Murphy made two clutch free throws to push the lead back to six with 21 seconds left, and after Flowery Branch missed on its end, Troup came down with the rebound, and Dowdell made a free throw with 13 seconds left to cap the scoring.

The Lady Tigers (15-5), who began the season ranked first in Class AAAA, have won 11 of their past 12 games, and everything seems to be falling into place at the absolute best time.

“At the beginning of the season, we were just slow,” said Monyia Murphy. “We were trying to get together, but now we’re coming. Like coach says all the time, we’re coming together at the right time.”

Troup’s semifinal opponent will be a formidable Cairo team  that is 17-1 and is coming off a 51-49 state-tournament victory over Pickens County.