Troup one victory from playing for state championship 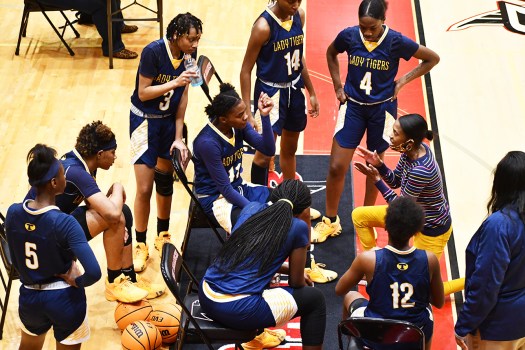 The Troup Lady Tigers came into the season feeling they had some unfinished business to take care of.

As memorable as the 2019-2020 season was for the Lady Tigers, it came to an unsatisfying conclusion with a loss to Americus-Sumter in the Class AAAA state-championship game.

If the Lady Tigers can handle Cairo on Friday in the semifinals of the state tournament, the players will earn the chance to play for the championship once again, and perhaps the story would have a different ending this time around.

If Troup beats Cairo, it would play either Carver or Cedar Shoals in the championship game on Wednesday at 5 p.m. in the Macon Coliseum.

Troup (15-5), after finishing second to Carver in the Region 2-AAAA tournament, began the state tournament with an 80-38 victory over New Hampstead.

After easing past Bainbridge 48-41 in the second round, Troup earned its spot in the semifinals with a 49-42 road win over Flowery Branch on Wednesday.

Troup’s semifinal opponent is a Cairo team that has only lost once all season.

For Troup, the formula for success hasn’t changed.

The Lady Tigers are a ferocious defensive team, as evidenced by the low point total of their three opponents in the state tournament.

Troup also has a balanced offense that was on display against Flowery Branch, with seven different players scoring.

Angie Dowdell, who has enjoyed a stellar freshman season, led Troup with 15 points, and she had nine points during the decisive fourth quarter.

Troup, clinging to a four-point lead after three quarters, outscored Flowery Branch 17-14 in the fourth quarter to win by five.

“(Dowdell) said she wanted it, and the girls weren’t afraid to give her the ball,” Thornton said. “Even in that timeout (late in the game), I said we need to get the ball into Angie’s hands, and everybody said you got it.”

Palmer had an outstanding all-around game, whether she was scoring, grabbing rebounds, blocking shots, or locking down on defense.

It was the sort of performance that made Palmer the Region 2-AAAA player of the year.

“She had a lot of rebounds, a lot of assists, and plays good defense,” Thornton said. “A lot of times she got switched off on a guard, and that’s something she hasn’t done much this season. She was doing whatever she could to help us win this game. It’s about being effective on the court.”

All of the players contributed to the stifling defensive effort, including Monyia Murphy, a junior guard who is a tenacious defender.

Murphy is oftentimes matched up with an opposing team’s top guard, and that was the case on Wednesday.

After the game, Murphy reflected on a game earlier this season when Troup played a powerful Collins Hill squad.

Although Collins Hill won that game 40-30, Murphy helped shut down guard Sacha Washington, who was later named the Region 8-AAAA player of the year.

“We played Collins Hills, and they have a guard that’s ranked on ESPN,” Monyia Murphy said. “If we can shut her down, we can shut anybody down.”

Monyia Murphy, like all of her teammates, knows what her role is, and she plays it to perfection.

While Troup has enormously talented players, some of whom will be playing Division I basketball down the road, a key to the success is everyone’s willingness to do what’s best for the team and not worry about individual accolades.

“We focus on being a team,” Thornton said. “We know it takes everybody, and everybody has to do their part for us to be successful. Everybody loves to see everybody succeed.”

Alexcia Murphy, a gifted post player who leads the team in rebounding and is also an effective rebounder and scorer, echoed her coach’s thoughts.

“Everybody gets to play, everybody contributes,” Murphy said. “It keeps us together. It keeps us motivated.”

WHAT: Fourth round of Class AAAA state playoffs

ON THE LINE: The winner will play either Carver or Spalding in the state-championship game on Wednesday at 5 p.m. in Macon.