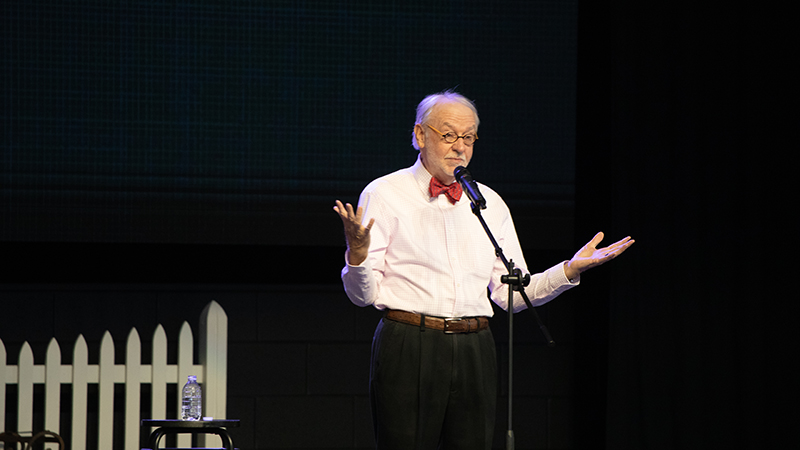 “Donald Davis – Stories From The Azalea, v.24.5” stood in place of what would have been the 25th annual Azalea Storytelling Festival.

“I have been coming to LaGrange for almost 30 years now,” Davis said. “This is such a marvelous community and festival. The festival is sponsored by so many different groups working together.”

Davis said he is always impressed by how the festival is organized to include some of the best story tellers from around the country.

Davis brought laughter to the crowd with his homespun stories of memories from his childhood. Davis was born in a Southern Appalachian mountain world rich in stories that makes him a natural in his craft.

“I was not surprised one bit that we had a full crowd out there,” Davis said. “People just love it so much.”

Davis performed twice on Saturday, March 6 in First United Methodist Church’s Wesley Hall — once at 2 p.m. and once at 7 p.m. About 100 people were allowed to attend each show and both shows sold out.

The festival also incorporated options for people to watch at home.

“We are grateful to the First United Methodist Church for allowing us to have the event there,” said Joyce Morgan Young, one of the festival’s co-chairs and co-founders. “Donald was so great and was pleased to have a live audience, even though he had to look at their eyes for a reaction since we all had on masks. I am very pleased and so grateful for the LSPA Board to giving us the go ahead. The committee worked tirelessly to get this together.”

Young said they had guests from far and wide attend the mini festival.

“We had a 90-year-old lady from Atlanta, who got her friends to come from North Carolina and pick her up and bring her because this might be the last one she’d ever get to hear,” Young said.

“She’s been a longtime friend of storytelling.”

Davis said it is important to keep the laughter going, especially with the current state of the world right now.

“It’s the way we maintain our health,” Davis said. “You know when we’re so separated we just get shut into ourselves, and we get out of balance.”

Davis also plans to return to LaGrange this summer to hold his sixth workshop locally.

Davis, who has participated in other virtual storytelling events over the past year, called this year’s event “kind of a compromise between doing something that we can’t do, and canceling it. We’ve got a middle ground here.”

The festival plans to hold a proper 25th anniversary celebration next year.