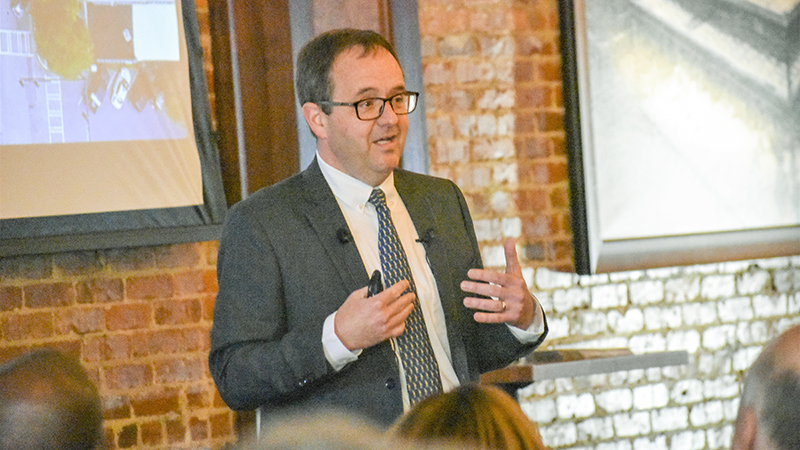 Thornton said he is ready to leave COVID-19 in the past and that he knows LaGrange wants to put it in the rearview mirror, along with the rest of the country.

“We are still battling COVID as a community,” Thornton said. “I’m pleased to say that LaGrange and Troup County and all of our various community stakeholders have really pulled together to try to work together to get ahead of it. I think we have made some good decisions that certainly were not individual decisions by one official or one council. It’s been a community collective.”

Thornton noted that the most important thing to him was not where the city is right now, but where it is going and the future plans of LaGrange. He added that the city is constantly looking at ways to get better.

“One of the things that makes LaGrange such a great place to do business are our transportation resources, our roads and our bridges,” Thornton said. “We’re located along a major Interstate corridor along 85. We’re located on two major US highways, 27 and 29. We have two major CSX rail lines that come through LaGrange. We have lots of roads and bridges on the local level to try to connect people.”

The city also expects the state to begin the widening of Hamilton Road soon after waiting decades since it was approved by the Georgia Department of Transportation in 1992.

Additionally, the city council recently approved a $27 million bond issuance that will allow the city to do needed upgrades to the city water and sewer system.

Thornton commended the city for having one of the lowest utility rates in Georgia.

“This is something that we continue to focus on because you need that,” Thornton said. “You and your business need transportation, you need infrastructure, water and sewer and you need low-cost utilities. That is something that we will constantly remain vigilant on. That’s what enables us to have a very robust manufacturing industry in the community LaGrange.”

Thornton said the city is imagining its tourism marketing industry. Due to COVID-19 and the lack of tourism, Visit LaGrange had to put some projects on pause.

Tourism has picked up some and so has marketing for tourism.

Construction on The Thread has also picked back up again and contractors are almost done with a segment that goes along Panther Way by LaGrange College.

Thornton said when the pandemic hit, the utilization of The Thread skyrocketed.

“We want to be a city that gets people out of their houses, out of their businesses and out into public spaces,” Thornton said. “We have renovated some existing parks. We have added new parks to bring new attractions and new amenities to the community. We do have more parks in store for you.”

Parks affected by the Hamilton Road widening project will be relocated or expanded.

During his update, Thornton noted that the community and community partners are collaborating to make LaGrange a better place, a safer place and a place to settle down.

“We’re trying to improve the quality of life for our community, and we’re trying to make the community better,” Thornton said. “I think most of you probably like LaGrange and many of you probably love LaGrange, but I want you to love it even more … I hope you will be inspired to do your part to find a place where you can plug in and to find opportunities to get involved. Be a part of that vision of making LaGrange better than we found.”