New event facility to be built at Pyne Road Park 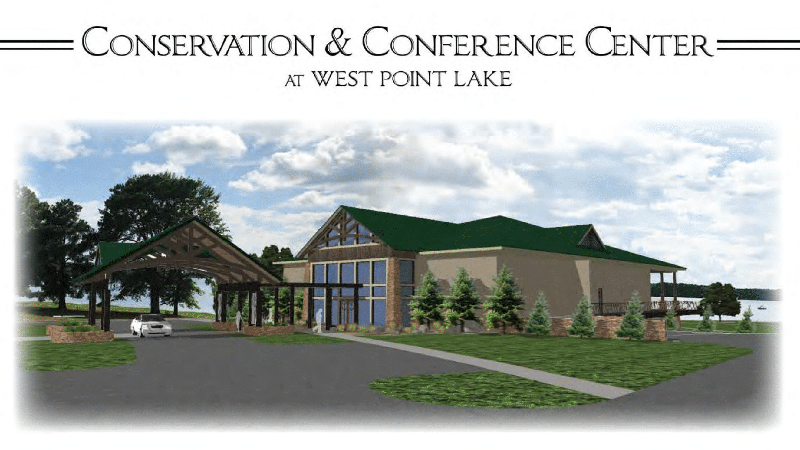 The Troup County Commission announced Tuesday night that it received a $1.8 million grant from the Georgia Department of Natural Resources.

The “Conserve Georgia” grant was awarded to construct the Oakfuskee Conservation Center at West Point Lake.

“A couple of years ago we had the DNR Commissioner come to the county courthouse to really talk about fishing opportunities in West Point Lake,” Chairman Patrick Crews said. “While he was here that day, he notified us about a new fund that had been established by the state of Georgia from a tax on sporting goods equipment and outdoor equipment. That money would be made available in grants to communities.”

Crews said that when Troup County originally applied a few years ago they did not receive funding but tried again recently.

Troup County is one of nine recipients within the state to be selected by the DNR for the 2020-2021 Georgia Outdoor Stewardship Program, a competitive grant cycle that saw 51 submitted applications for requested funding.

Crews noted that construction will be six to nine months off due to finishing details with the Army Corps of Engineers.

“We hope to be able to construct this building that will cost in the neighborhood of $6 million,” Crews said. “The funding will be coming from $1.8 million from the state, $3 million from SPLOST that the citizens approved three years ago, and we had a grant from the Callaway Foundation for $1.5 million. This will be a very nice facility.”

Local governments, recreation authorities, state agencies and qualifying non-profit agencies were all eligible to apply, but the Georgia Outdoor Stewardship Trust Fund Board of Trustees ultimately selected five projects from local governments, three projects on state lands and one proposal for the acquisition of conservation land by DNR to receive a grant, which totals to $20.58 million in funding. All recipients’ applications were approved by the Board of Natural Resources and the Appropriations Subcommittees of the State House of Representatives and the State Senate over DNR.

The new facility will be able to hold up to approximately 300 people and will sit overlooking the lake at Pyne Road Park.

“We’re really excited to get this grant,” Crews said. “We are excited for what it could represent to our tourism in this area of people visiting West Point Lake.”

The building will be an event facility for weddings, family reunions, corporate events, fishing tournaments, birthday parties and more.

Troup County is also partnering with The Chattahoochee Riverkeeper for the building. The Riverkeeper will have its own office space in the building on the lower level for educational opportunities, recreational amenities, and environmental value to the community and should result in increased economic activity.

“I think that Pyne Road Park is one of the most unutilized things we have in Troup County,” said Commissioner Lewis Davis. “To be able to do this and bring in the students and community to educate them about water conservation will be asset. Hopefully, we can bring people from surrounding areas here to this community too. I think there are nothing but possibilities.”