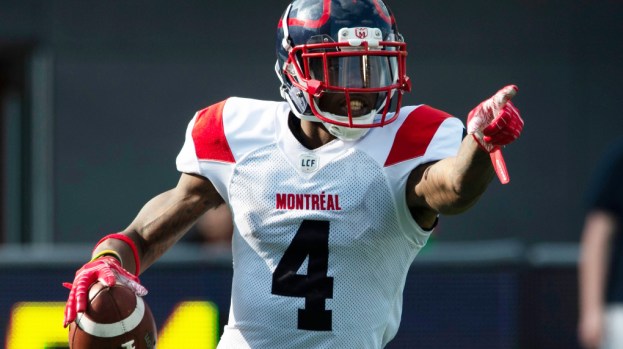 Quan Bray is headed back to Canada.

The former Callaway and Troup standout who starred at Auburn University for four seasons is returning to the Canadian Football League.

Bray was with the Montreal Alouettes in 2019, and he has been re-signed by the team to a one-year deal.

During the 2019 season, Bray caught 58 passes for 818 yards and six touchdowns, and he returned 14 punts for 123 yards while helping lead the Alouettes to the playoffs.

Bray starred at Callaway High for three seasons before spending his senior year at Troup.

Bray was at Auburn for four seasons, and he finished his college career with 93 catches for 853 yards with seven touchdowns.

During a memorable senior season in 2014, Bray caught 39 passes with four touchdowns, he returned two punts for touchdowns, and he had a rushing touchdown.

Bray, in fact, became the first Auburn player to ever have rushing, receiving, and punt-return touchdowns in the same season.

Bray was signed by the Indianapolis Colts as an undrafted free agent in 2015, and he spent three seasons with the team, serving primarily as a punt returner.

Bray was with the Bills and the Texans during the preseason in 2018, but he didn’t land a roster spot with either team.

Bray enjoyed a career revival in 2019 when he excelled in Canada, and he also played for the Birmingham Iron of the now defunct Alliance of American Football that year.

Bray’s career was in jeopardy when he and former Auburn teammate Greg Robinson were arrested last February in Texas after being found with 157 pounds of marijuana in their rented vehicle.

With the legal issues behind him, though, Bray is resuming his playing career, and Alouettes’ general manager Danny Maciocia is glad to have him.

“We are happy to once more be able to count on a receiver of Quan’s caliber. He adds depth to our talented group of receivers,” Maciocia said “We are aware of Quan’s recent entanglements with the law. One of the charges was dropped and he pleaded guilty to the second for which he received a fine. Quan fully realizes that he is getting a second chance and knows that he will have to walk a straight line if he wishes to continue making a living (playing) the sport he loves.”

Kharia Jones, the team’s assistant head coach, stressed that Bray was a model team member during his first stint with the Alouettes.

“Above his performance on the field, Quan is a great teammate and is appreciated by everyone in the locker room,” Jones said. “We are happy to have him back with us. He has showed great character and we are convinced that he will make all the right decisions moving forward.”