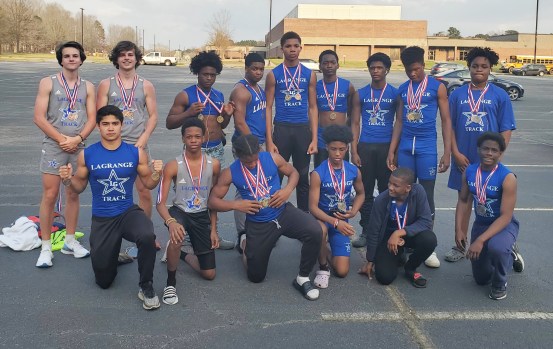 When the 2020 track-and-field season ended prematurely because of COVID-19, LaGrange High’s Kale Gibbs was taking no prisoners in the hurdle events.

Gibbs was winning races and putting up times that made him a major contender to compete for a state championship.

While having the season end early was a disappointment, the good news for Gibbs was that he had the 2021 season to look forward to, and he is making the most of that opportunity.

Gibbs is enjoying another standout season, and he kept it going with a strong performance in the Christian Taylor Invitational on Saturday at Sandy Creek.

Gibbs has competed in three meets this spring, and he has finished first in five of his six individual events.

In the competition at Sandy Creek, Gibbs won the 110-meter hurdles with a time of 16 seconds, and that was more than a second faster than the second-place finisher, Nate Sikes of Whitewater.

In the 300-meter hurdles, Gibbs finished with a time of 42.37 seconds, leaving him just off the pace of Whitewater’s Nathan Wallace (42.08 seconds).

Also earning a first-place finish for LaGrange at Sandy Creek was Neveah Boddie, who won the shot put with a throw of 30 feet, 11.5 inches.

While LaGrange didn’t have any other first-place finishers in the meet, it had a number of other athletes who placed high and earned a place on the awards podium.