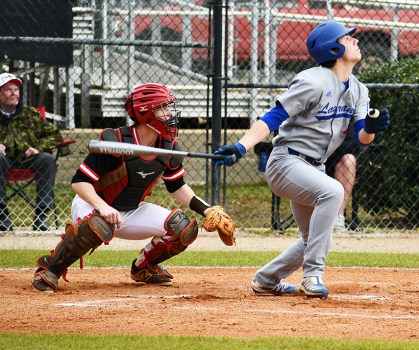 Sure, we’d heard about a virus that was making its way around the world, but it didn’t seem to be having much of an impact here.

Life was going on as always, and on a Wednesday afternoon in March, I was at Calle away High on a brilliant spring afternoon watching the host team play the LaGrange Grangers.

Nothing seemed amiss, and the hundreds of folks in attendance were enjoying the ballgame (these were the pre-social-distancing days).

Just one day after Callaway and LaGrange played, the Troup County school system issued an announcement that all extracurricular activities had been postponed.

It was, we all hoped, a temporary measure, and during the early stages there was a legitimate belief that sports would resume before the school year ended.

As time went on, though, the likelihood of sports coming back anytime soon seemed like a longshot.

One month after everything was shut down, the inevitable happened, with Georgia High School Association executive director Robin Hines announcing that there would be no more sports for the remainder of the 2019-2020 school year.

It was a tough blow for all student-athletes in Troup County, but it was especially painful for the seniors, who wouldn’t get a do-over.

I recall talking to the coaches at that time, and the overwhelming feeling was one of    disappointment for the seniors, who were denied so much.

“My heart breaks for the senior class,” LaGrange girls’ soccer coach Andy Fritchley said at the time. “You kind of have this on your mind during your playing career, going out and having a senior night, and doing something special on my last night out. Obviously this is a crisis world-wide, and I know the girls understand that, but you still have empathy for the situation.”

At Callaway, baseball coach Dusty Hubbard said at the time that seeing a season cut short “breaks your heart.”

“That’s the first thing (the players) say to you when you talk to them is I can’t believe this has happened, and I can’t either,” Hubbard said. “I would have never ever guessed something like this would happen. It’s just unprecedented.”

I wish there had been some way for the seasons to continue, for the seniors to get some closure, but there was no way to make it happen.

Beyond the playing field, it was unfortunate to see the seniors (including my daughter Rachel) miss out on so much.

Was canceling everything the right decision?

At the time, I did not think it was, but looking back you can see why it happened.

There were so many unanswered questions about the virus, and while over time it became evident that the health impact on teenagers was minimal, we didn’t know that at the time, and the health of the coaches also had to be taken into account.

With the 2020 spring seasons lost, the question became, when would sports return? No one had the answer to that.

There was the possibility that the 2020 falls sports season could be lost, but thankfully that didn’t happen.

Through the leadership of the Georgia High School Association, and with coaches in our community and across the state pushing for the return of sports, the playing fields were open for business once again in August.

Other states weren’t as fortunate.

I’m thankful to live in a state where those in leadership positions understand the importance of high-school sports, and what it means to the student-athletes.

Just think about what we would have missed out on if there had been on sports during the 2020-2021 school year, and the opportunities that would have been denied to the hundreds of student-athletes at the local schools.

I’m reflecting on that day in late December in Atlanta, with Callaway’s football team beating Fitzgerald to win a state championship.

What a moment that was for coach Pete Wiggins and the players, and to think it wouldn’t have happened if Georgia had gone the way of other states.

There have been so many other special moments as well, and there are more to come as the spring seasons hit the home stretch.

If there is a positive that came from the 2020 shutdown, it’s that I do believe we all (myself included) have a greater appreciation for high-school sports.

I remember that first football game in September between Troup and Harris County, and how great it felt to be on the sidelines.

I got chills just being under the lights, and watching the players do what they love to do.

While COVID-19 is still with us, it looks like we’ve turned the corner, and that the 2020-2021 sports seasons will all make it to the end, and I’m not sure I would have given great odds of that happening last summer.

Thank you to the coaches for their perseverance and leadership they have shown, and to the student-athletes for the commitment they have, and will continue, to show.

It’s been a school year like no other, but the show has gone on, the games have been played, and I know we are all incredibly grateful for that.

Here’s hoping we will never again see a repeat of that fateful spring of 2020.