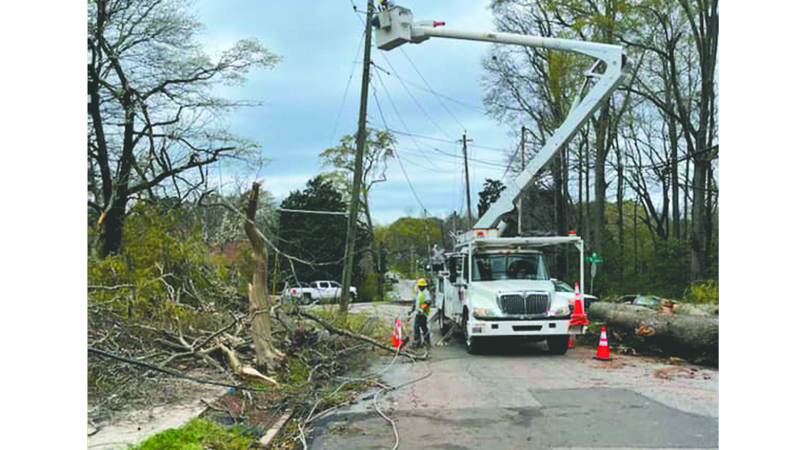 The city of LaGrange and Troup County are assisting Coweta and Heard County after a tornado caused significant damage in both communities Thursday night into Friday morning.

Mayor Jim Thornton said a utility crew and LaGrange Fire Department crew were heading to Newnan to assist Friday morning. Thornton said he had been in contact with Newnan Mayor Keith Brady Friday, asking about other ways the city could help.

“We try to help any of our neighbors when they’re in need,” Thornton said. “And in this instance, we have the ability to help Newnan in a particular way because we’re both electric cities through [Municipal Electric Authority of Georgia]. That means we have some resources that they desperately need in a time like this. We help all other cities, regardless of whether they’re a MEAG city if they have a time of need, we can help, but particularly we have the ability to help Newnan because they are an electric city.”

Thornton said LaGrange sent five electric linemen with their trucks and equipment, a five-member tree crew, and one fire engine with a company of three firefighters.

“All of them have been deployed to Newnan and are following the city’s direction,” Thornton said.

Thursday was a day of significant, long-track tornadoes in Alabama, and at least two of those tornadoes made their way into Georgia, including the storm that impacted Heard County and Coweta County Wednesday night into Thursday morning.

“We are very fortunate that  … our MEAG family across the state, cities like Marietta, Griffin and LaGrange, show up and help us with this cleanup and we appreciate this very much,” Brady said at a press conference Thursday morning.

“Ultimately, we know when things get rough, it’s always great to be able to count on your neighbor, and we know that in the future Troup County will have a need at some point,” Mosley said. “We know it sure is great to have friends surround you.”

Thornton said he had not heard from Heard County, where the tornado reportedly caused damage around Franklin.

“We haven’t gotten any specific requests from Heard County, but certainly if there was something we could do to help them we would,” Thornton said.