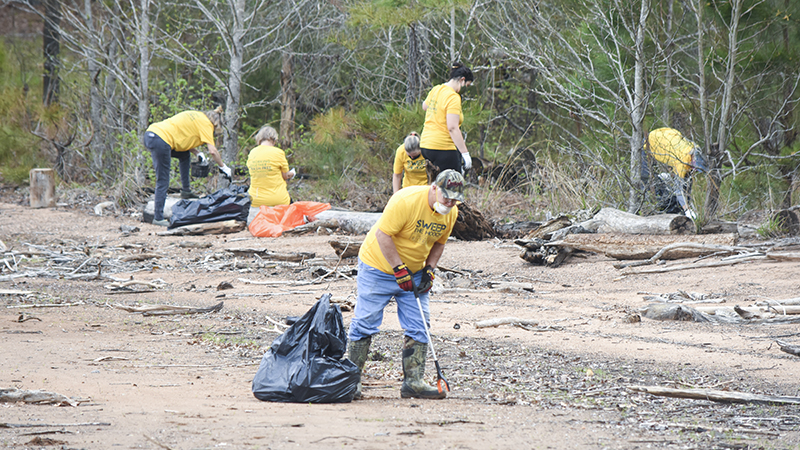 Several volunteers participated in the Sweep the Hooch event Saturday at West Point Lake, picking up dozens of bags of trash to make the waterway cleaner.

The effort was part of a statewide effort of more than 50 sites and 1200 volunteers. Locals picked up trash at Pyne Road Park and McGhee Bridge Park for several hours on Saturday morning.

“We’re helping make the lake a cleaner place, and I’m glad we’re not the only ones doing this,” said Henry Jacobs, Middle Chattahoochee director for the Chattahoochee Riverkeeper. “I’m glad other groups in LaGrange and Troup County are taking the same kind of initiative. It seems like there’s a lot of momentum in the community right now, and it’s good to be a part of it.”

Jacobs said Riverkeeper typically focuses on the same sites each year, as they are the easiest to access and seem to accumulate a lot of the trash. He said if they had plenty of money, Chattahoochee Riverkeeper would get a boat and go around to every cove on the lake.

“For now, we are doing what we can with the resources and volunteers we have,” Jacobs said.

He said Sweep the Hooch is growing each year. He said in the first year there was one site with about a dozen volunteers. In year 11, it has become a statewide initiative.

“It’s a testament to our support from our volunteers, and our partners who are helping lead these sites,” he said.

“That’s what we find is all these plastic bottles and Styrofoam cups,” Jacobs said. “I think in the long-run we need to get to the point where we are no longer using these single-use plastics. That’s something the average, everyday person in LaGrange and Troup County can do — look at things they using in their everyday lives that are going directly in the trash can after one use. I think that’s ultimately how we get to a clean lake.”

The Riverkeeper has also installed trash traps at Blue John Creek and Dixie Creek in February to slow the flow of trash.

At least three of the volunteers Saturday traveled from Marietta, well over an hour, to participate.

“I was probably a little bit late trying to find a spot on the Chattahoochee in Marietta, going through Atlanta and stuff [all the cleanups] were full,” said volunteer Tim Brooks. “My daughter is going to be starting LaGrange College this fall, so we figured this would be a good place to go.”

Brooks, his wife, Michelle, and daughter, Mya, all made the trip to help out.

“We want to be a part of the solution,” he said. “We all contribute to the trash we make, so it’s up to all of us to try to clean up our surroundings, whether it’s in Marietta or here in LaGrange. It doesn’t matter. It’s all connected.”

Gage Bailey was leading the site cleanup at Pyne Road Park on Saturday, and he urged people to be careful with how they dispose of their trash.

“A lot of people, especially when we talk about preserving our environment, it tends to take on a more political barrier. I don’t want it to be that way,” Bailey said. “It doesn’t matter what side you’re on to care about the environment. Everyone has the capacity to learn what’s beneficial for our environment and what’s harmful to it. This isn’t a partisan issue. This is an issue that we should all be cognizant of. In the end, it may not seem like it, but it comes back to hurt us. If that’s not an incentive, then I don’t know what is.”

The Riverkeeper will hold more cleanups throughout the year. Follow the Riverkeeper on social media and at Chattahoochee.org for more information.