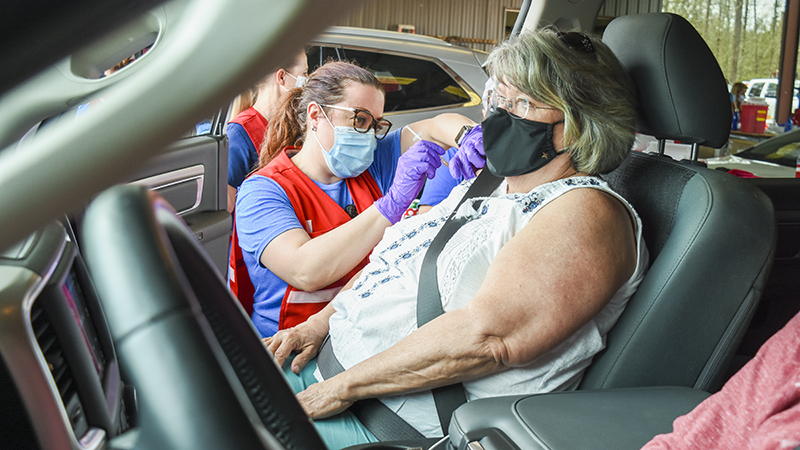 The Troup County School System Bus Barn was lined with cars on Saturday, as District 4 Public Health and Troup County Health Department worked to administer as many as 1500 vaccines.

Appointments started at 8 a.m. and lasted until 5 p.m. in the largest single-day effort yet in Troup County so far. Before Saturday, the most vaccines administered in one day occurred when approximately 650 TCSS employees received their first shot.

“Generally, we have four lanes open and eight vaccination stations, so we are able to vaccinate eight people at one time,” said Yesenia Arreguin, District 4 Public Health emergency preparedness deputy director. “We have barely had any wait throughout the day.”

Arreguin said there is typically a backlog first thing in the morning, as people arrive before their appointment time. That wasn’t a problem Saturday.

“We did not see that today,” she said.

There were about 40 to 45 appointments scheduled per 15-minute increment. The first station verified appointments, the second verified filled out forms and from there, patients drove up and received their vaccine shot.

Then, a 15-minute wait occurred where AMR officials watched the clock and oversaw patients before giving them the green light to leave.

Each Friday, there have typically been vaccinations administered at the bus barn. Troup County has typically received the Moderna vaccine, which is easier to hang on to if there is any left over. But Saturday Pfizer was being administered, and Arreguin said any leftover vaccinations would need to be used by Tuesday.

“Whatever we have left over, [with Moderna] we can just put back in the freezer,” Arreguin said Saturday. “Today, we are using Pfizer so it gets a little more complicated. It is already dethawed from the ultra-cool so now its frozen, so now we have to use that batch.”

Hayla Folden, District 4 Public Health Information Officer, said Monday that 1,332 vaccines were administered on Saturday. A smaller clinic has been planned to use the 168 unused doses.

Pfizer requires a 21-day wait period before the second vaccine, so anyone who received it Saturday had their second appointment set up for April 17.

Troup County EMA Director Michael Strickland said he’s been to numerous vaccine drives locally but that Saturdays was by the far the largest.

“Typically, these are in the 500 to 600 range, and this is 1500,” Strickland. “There was an expanded amount of time, a lot more work was involved, a lot more pieces to the puzzle to put together. But quite honestly, this is run as smooth as silk. Everybody seems to be upbeat and positive about being here and helping and a lot of people comment on how efficient is it.”

Strickland started his position in January and noted how important it is that the various agencies have practiced in years past, just in case a mass vaccination drive needed to occur due to a public health emergency. The bus barn has been the practice site.

“That pre-planning and practice ahead of time is definitely paying off to help this go as smoothly as it has,” Strickland said.

Arreguin said the Georgia Department of Public Health and the health departments across the state are working hard to get vaccines to everyone who wants one. Gov. Brian Kemp announced last week that anyone 16 and over in Georgia could get the shot. Pfizer remains the only shot approved for people under 18.

“I’d say be patient. We are trying the best we can to get shots in arms, and we are doing this for the community,” Arreguin said.

At various points over the last week, appointments have been available locally at Kroger and both Walmart stores.  Publix, CVS and Walgreens are also giving out shots, along with any future drives held by the health department.

The Georgia Department of Public Health’s COVID-19 vaccine dashboard is currently unavailable due to data transfer issues. Typically, the dashboard shows the number of vaccine administered by county, but overall more than 3.6 million shots have been administered in Georgia.

COVID-19 cases have also slowed in Troup County in March. There have been 190 total cases in Troup County this month, according to the Georgia Department of Public Health.