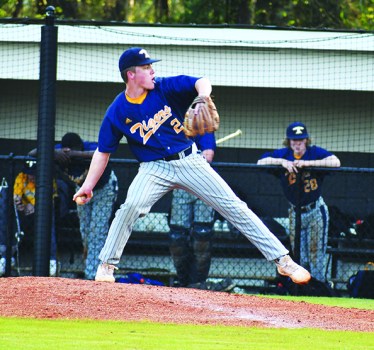 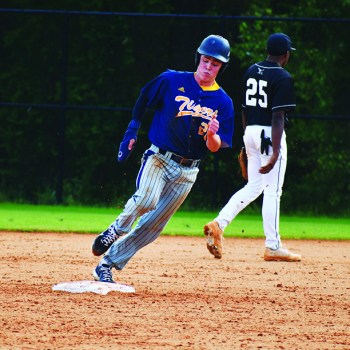 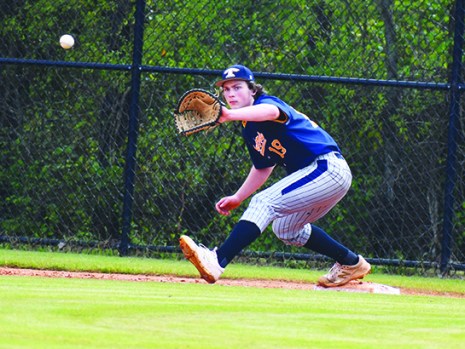 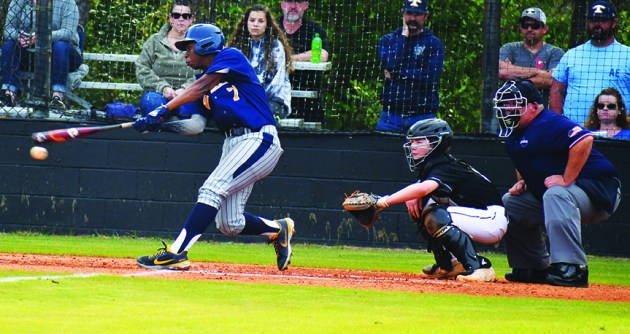 COLUMBUS – They had it all working.

The red-hot Troup Tigers excelled in every facet of the game on the way to an 11-0 road win over the home-standing Shaw Raiders on Tuesday in a game that ended after five innings because of the run rule.

Daniel Martin and Ethan Morton combined for the shutout, the defense put together an impressive highlight package, and the offense banged out 14 hits, with Josh McDonald leading the way with four doubles and four RBIs.

Troup (17-2 overall) improved to 5-0 in Region 2-AAAA while extending its winning streak to eight games.

“I’m proud of those guys for coming back after being off for three or four days,” said Troup head coach Tanner Glisson. “We knocked a little rust off, and to finish it early (because of the run rule) that was good.”

A strength of Troup’s team this spring has been the defense, and that was on full display.

Before Morton pitched he was at second base, and he made an outstanding play on a groundball up the middle to end the second inning and likely save two runs since the bases were loaded at the time.

In the fourth inning, with Morton on the mound, Troup delivered three defensive gems.

Brett Haynes made a diving catch in right field for the first out, first baseman Josh McDonald made a nice over-the-shoulder catch for the second out, and catcher Colton Webb threw a would-be base stealer out at second to end the inning.

In the fifth inning, left fielder Mason Atkinson fielded a base hit with one out, and he threw a strike to home to nail the runner and keep the shutout intact.

“We thought all year long our defense was pretty good,” Glisson  said. “Our outfield has gotten better, our arms have gotten better. We made a big throw against Columbus (for an out at the plate), and we made another big throw today with Mason. Defensively, when we’re on top of our game, we’re pretty good.”

The beneficiaries of the stellar defense were Martin and Morton, who combined for the five-inning shutout.

Martin pitched the first three innings and held Shaw to two hits while striking out three, and Morton worked around two hits and two walks to throw two shutout innings.

Morton said knowing the defense will usually make the plays is “definitely reassuring.”

“You know that if they square it up my guys are going to be there to pick it up,” Morton added.

Offensively, McDonald had a memorable day, going 4-for-4 with four doubles and four RBIs.

Reed Morris had two hits with a triple and three RBIs, Devon Murphy had two hits and two RBIs, Morton had a base hit and an RBI, Atkinson had two hits, and Haynes, Webb and Hunter Kitchens each had a hit.

The Tigers started quickly with four runs in the top of the first inning.

Haynes led off with a base hit, and Murphy followed with an RBI double to get the Tigers on the board.

Next up was Morris, and his RBI triple gave the Tigers a 2-0 lead, and McDonald came through with the first of his four doubles to extend the lead.

Morton finished the rally with an RBI groundout to bring in McDonald.

The Tigers pushed two more runs across in the second inning.

Kitchens led off with a base hit, and he later scored on a passed ball to make it a 5-0 game.

Later in the inning after Murphy singled and Morris was hit by a pitch, McDonald struck again, with his second RBI double of the game giving the Tigers a 6-0 lead.

The Tigers continued to pour it on in the third inning, scoring five more runs to finish the scoring.

Morton got things started with a solid base hit to right field after he fouled off a handful of tough two-strike pitches.

Morton said his approach was to “just stay in the at-bat, and wait until you get that pitch you can do something with.”

Webb and Atkinson followed with bunt singles to load the bases, and with two outs, Murphy walked to drive in a run.

Morris kept the scoring barrage going with a two-run single, and the Tigers led 9-0.

That brought McDonald to the plate, and he did it again, ripping the ball down the left-field line for a two-run double, and Troup led 11-0.

Troup didn’t score in the fifth inning, but McDonald did have his fourth double of the game.

Troup will look to keep the wins coming when it hosts Shaw on Friday, with first pitch set for 5:30 p.m.