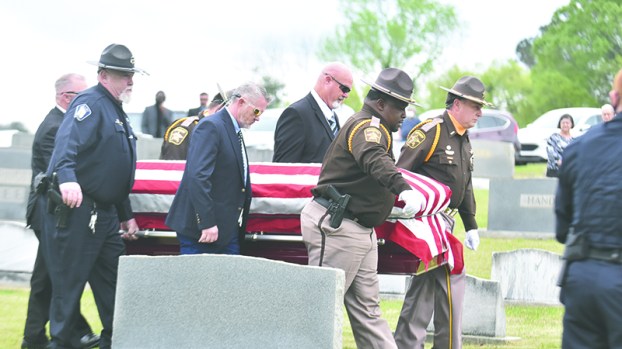 The casket of Major Jason Fuller is carried during his funeral on Wednesday.--Wayne Clark

WEST POINT — Captain Jason Fuller of the Chambers County Sheriff’s Office was laid to rest Tuesday afternoon in Marseilles Cemetery.  Funeral services were held inside the Valley Community Center before a procession that included approximately 40 law enforcement vehicles led everyone to the graveside service.

Fuller was only 47 years old when he died last Friday. He had been a law enforcement officer since 2001.

Pastor Darren White of Emmanuel Baptist Temple and Evangelist Ronnie Trenton, who has ties to Emmanuel, spoke at the 2 p.m. service at the community center.

“Jason loved the Chambers County Sheriff’s Office and serving with his fellow law enforcement officers,” White said. “He was a caring person, always willing to help anyone who needed help.”

Area law enforcement officers had a most impressive presence at the funeral service and at graveside. Officers from the Chambers County Sheriff’s Office, local police departments, the Lee County Sheriff’s Office and Alabama State Troopers were in dress uniforms, some of them with gold braids on their shoulders and wearing white gloves. Draped with a U.S. flag, the casket was at the far west end of the Community Room.

Two officers folded the flag and gave it to Chambers County Sheriff Sid Lockhart, who knelt next to Jason’s parents and said some comforting words as he presented it to them.

Several volunteers participated in the Sweep the Hooch event Saturday at West Point Lake, picking up dozens of bags of... read more