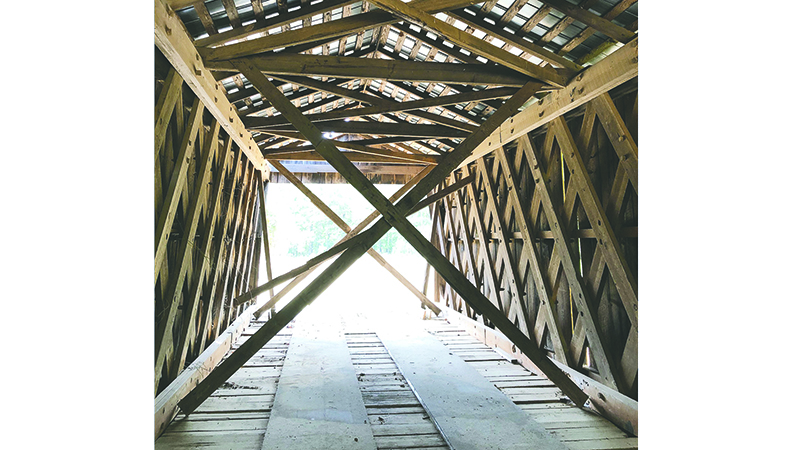 A historic covered bridge built by George King, son of Horace King is returning home to LaGrange. The bridge has been at Callaway Gardens for the last 56 years but will be returned to LaGrange and installed near the Mulberry Street Cemetery. --Contributed

The bridge has been located at Callaway Gardens in Pine Mountain since December 1964, when the Troup County Commission agreed to give the bridge to the gardens. According to a Visit LaGrange press release announcing the bridge’s homecoming, a stipulation in the agreement asked for the bridge to be erected in the gardens no later than December 1965.

From 1965 until 1983, the bridge sat where the John A. Sibley Horticultural Center is currently. In 1983, the bridge was moved to a field behind the Sibley Center, where it has continued to sit.

Now, it’s coming back to LaGrange, where will be part of a renovation of the Mulberry Street Cemetery and will be placed near Horace King’s gravesite.

“I’m ecstatic for the bridge to be out in the public for people to be able to see it,” said Kathy Tilley, CEO of Visit LaGrange. “And the fact that that can happen in LaGrange makes it even better. So, I’m thankful that the city, the county, Callaway Gardens and Visit LaGrange could all work together to get this done.”

The bridge will cross the Oseligee Creek connecting The Thread Trail to the cemetery.

Tilley said it took “divine intervention” for all of the timing to work out the way it did. If the Thread hadn’t planned to go by Mulberry Street Cemetery, Tilley said Visit LaGrange probably never would’ve thought about the possibility. It just happened that a creek runs there as well, giving the ability for a bridge to be put in place.

And, on top of all that, Tilley said Callaway Gardens generously decided to say yes after hearing all of the plans. Tilley worked at Callaway Gardens for 19 years, leaving as president of sales and marketing.

Tilley said there is not currently a timeline for when the bridge will be brought to LaGrange, as the company doing the move has been caught up with trying to fix a bridge in Pensacola that collapsed due to Hurricane Sally.

Tilley said the original plan was to try to bring the bridge to LaGrange all in one piece, but that’s been proven impossible due to its size, which is 60 feet long and 15 feet wide. Tilley said the bridge will “gently” be taken apart for the move and then be put back together.

The bridge was built using a sophisticated bridge-building technique called the Town Lattice-Truss system which King perfected. The wooden planks are joined by hundreds of wooden pegs approximately two inches in diameter and several inches long.

“Some parts are going to have to be repaired and replaced, but I’d like to leave it as authentic as possible,” Tilley said.

Tilley said the cost of moving the bridge will be paid for by tourism dollars via the hotel/motel tax.

“We are thrilled to see this historically significant bridge return to the City of LaGrange and Troup County,” said LaGrange Mayor Jim Thornton in the press release. “We are grateful for the partnership between the Ida Cason Callaway Foundation and Troup County that made this possible.”

In 1873, King, the famed 19th Century bridge builder and Alabama legislator, originally constructed a bridge over Wehadkee Creek in Troup County to carry Harmony Church Road over Wehadkee Creek at Cofield’s Mill. A flash flood in 1886 destroyed the original bridge. A 110-foot long replacement was constructed by King’s son, George, using his father’s design, in 1890. A 60-foot section of the bridge is what was moved to Callaway Gardens in 1965.

“The Ida Cason Callaway Foundation (ICCF) Board of Trustees is delighted to be a part of the renovation of the Mulberry Street Cemetery by returning the King bridge to Troup County,” said Fran Rogers, Chairman of the ICCF Board in the press release. “We are excited that many visitors in LaGrange will be exposed to the remarkable King family of builders.”

The idea to honor King was first presented at the LaGrange City Council retreat in August as part of preliminary plans to renovate Mulberry Cemetery, which is where King’s grave is. Mulberry Cemetery also contains a Civil War cemetery.

According to previous reporting, in 2015, the historical society determined there were also 425 people buried on a hillside at the site, most of them unmarked, most of them African Americans who were likely slaves. Tilley said she would like for the unmarked graves to have some kind of marker as well. She said if anyone knows of a family member buried there, Visit LaGrange would like to hear from them as they work to piece the history together.

“It’s a beautiful place and Visit LaGrange will promote all three aspects of that. I think you have to tell the whole story. You can’t just tell one of those pieces,” Tilley said. ‘There’s like 350 Civil War soldiers there, there are 425 people buried out in the middle and there’s Horace King who is a bridge-builder, who could not be a more perfect connection between the two. We will be promoting the history of all those lives that in that cemetery.”

Once it’s all done, Tilley said she’d like to see school-aged children take field trips to the area and hopefully get LaGrange College to play a role in an educational piece as well. She said hosting cemetery tours might be possible one day as well.