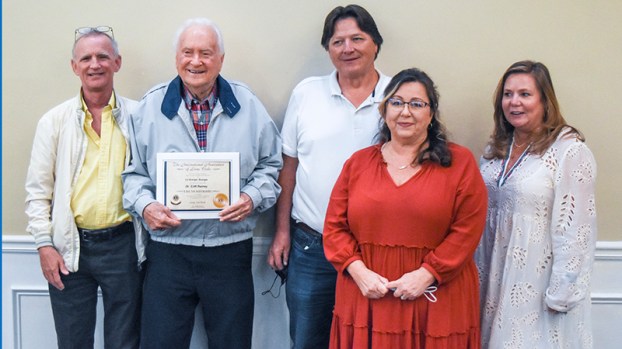 Dr. Cliff Rainey, who was recognized for 65 years in Lions Club, is surrounded by his family. Rainey received a life membership awarded from the Lions Club. --Daniel Evans

Cliff Rainey, a longtime optometrist in LaGrange, was recognized Tuesday by the Lions Club for 65 years as a member.

Surrounded by friends and family, Rainey, soon to be 91, was awarded a life membership by the International Association of Lions Clubs.

“I love this town with a passion, and I love all of you,” Rainey said while thanking everyone for the recognition, which he wasn’t expecting.

“We want to thank you doctor, you continue to inspire us,” Fuller said, noting all the money and time Rainey had donated toward Lions Club initiatives, such as improving quality of life for people with poor vision.

Martin noted that Rainey is the reason the Salvation Army returned to Troup County, calling him a “blessing” and the reason the nonprofit gets to help so many people locally.

“He is the first one to offer a blessing when the food has been served, and if you’ve ever talked to Cliff on the phone, the last thing he says is ‘I hope you have a blessed day,” Young said.

Thornton said that Rainey was a blessing to the community, just through his work as an optometrist, but thanked him for his work as a “community advocate.”

“He has touched all of our lives all of these different ways, but all of us who call LaGrange and Troup County home are the beneficiary of his lasting legacy of business development in LaGrange,” Thornton said.

Thornton noted that in 1965 Rainey was elected the chairman of the LaGrange-Troup County Chamber of Commerce.

“Over the course of the next three decades, Dr. Rainey was one of the most active members of the Development Authority of LaGrange,” Thornton said.

“Those were critical years in the history of LaGrange and Troup County… Dr. Rainey through his work at the development authority … was instrumental in the formation of the LaGrange Industrial Park, opening up land to diversify our industrial base, so that we became not just a textile town, though we are and remain a very vital textile community, but to expand into other industries to bring new residents to LaGrange.”

Thornton said when people ask about LaGrange’s robust industrial base, he usually jokes that it’s an overnight success story 20 years in the making. However, he said that work really started decades ago with people like Rainey.

“It’s more like 65 years in the making. We have had a legacy of leaders and Cliff Rainey has been at the top of that list of people who have not just worked to promote their own businesses but have worked to expand our community. We are all the beneficiaries of that legacy.”

Thornton called Rainey a hero in the growth and economic development and expansion of industry.