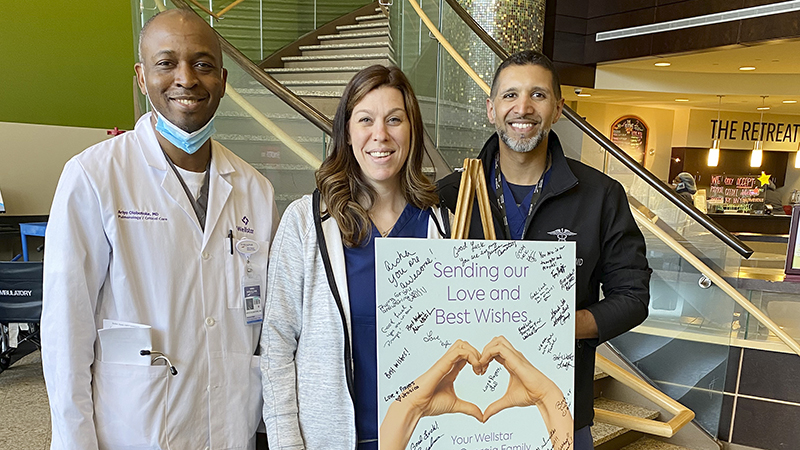 Dr. Ariyo Olobatake and Dr. Salman Fidahussein stand with Casey Duffield at a send-off held before Duffield traveled to Ohio to take part in a study involving her rare form of muscular dystrophy. --Contributed

LaGrange resident and WellStar West Georgia Medical Center nurse Casey Duffield was in Ohio on Wednesday, participating in a muscle study as doctors work to learn more about the rare form of muscular dystrophy she’s been diagnosed with.

Duffield was diagnosed with hereditary myopathy with early respiratory failure (HMERF) in 2017. HMERF is a strain of muscular dystrophy disease, and it’s extremely rare — so rare that after her diagnosis Duffield was unable to find research or advocacy groups.

The diagnosis especially hit home for Duffield, as she’d spent years as her father’s primary caregiver before he passed away from muscular dystrophy in 2004.

Her mother, Chris Duane, and husband, Josh Duffield, have led the way in starting Casey’s Cure, a fundraising effort to help fund research toward rare forms of muscular dystrophy, like Casey’s.

And Wednesday’s trip to Ohio State University Medical Center — a study Duffield had hoped to participate in for months— was among the first major steps planned . As part of the study, Dr. Jennier Roggenbuck and Dr. Hank Grazier are studying the TTN protein, which plays a role in the muscles the body uses for movement.

Duffield said on Wednesday doctors made a small incision in her upper shin and took four small needle biopsy samples of her muscle. A separate skin sample was also taken.

Specifically, the study is focusing on people with a titinopathy, a form of a muscular dystrophy due to defects in the TTN gene. Right now, Duffield said about 20 people are a part of the study.

Through Casey’s Cure, thousands of dollars have been donated and much more is needed as they work to find a treatment.  The foundation has three goals — to raise awareness for rare forms of MD, to create a registry of HMERF patients and other rare forms of MD to support any research/clinical information and promote research efforts.

“I want them to know how grateful I am for all their support, their prayers their words of encouragement, and their positive energy,” Duffield said to people who have donated to Casey’s Cure and all of her supporters. “It only helps me continue to fight and help me get in front of the cause, and that without them I can’t do what I’m doing.”

“It was heartwarming,” Duffield said. “We never really sure how people feel and when they show up and they surprise you, it makes you feel more important and more unique. And the fact the company that I work for is so supportive, the fact that my physicians that I work for, and my co-workers are just as supportive is even more encouraging, and helps me continue to fight to know that I have their support,” she said.

Duffield said she can tell the disease is progressing, but that she has good days and bad days. She explained in a past interview that one day she can do anything that anyone else can do. The next day she might be struggling to hold her pen or vacuum her house.

“I need people to understand that in five years when I look sick, by time when we get to that point where I look as it is a problem, it may not be too late, but it won’t help as much as it would now,” Duffield said in September. “I need people to give, and I know how that may sound, but I want to live a quality of life.”

Duffield is hoping to head to Arizona next for a stem cell treatment, but more fundraising is needed before they can become a reality. To donate and to learn more about Duffield’s journey, visit www.caseys-cure.org.