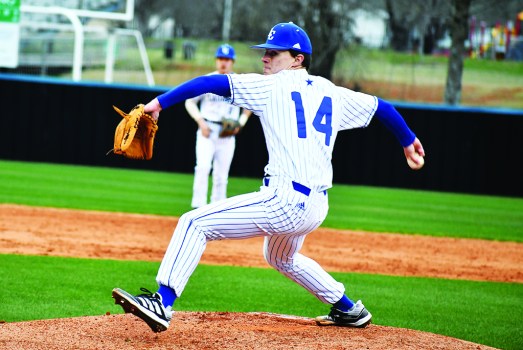 The LaGrange Grangers don’t win every time Matthew Morgan is on the mound, but the senior always gives his team a chance.

Morgan was exceptional as always during Thursday’s road game against Landmark Christian, pitching six dominant innings to lead his team to a 4-1 victory.

Morgan held Landmark to two hits and no earned runs while striking out nine batters, and Landon Tucker worked a scoreless seventh inning to finish it.

I think the weather dictated that a little bit. It was cold, windy, not a great velocity day. But he was really good. He was sharp. He only walked one, his pitch count was low, and he only gave up two hits. And we made two or three errors. We made some good plays, too, but we made some errors, and the thing that’s impressive about him, he pitches right through it.”

Morgan also contributed at the plate with two hits and two runs scored.

Seth Stargell had two hits, a sacrifice bunt, and an RBI.

Ty Medders came through with a two-run double, Mason Wolfe had a hit and a run scored, and Will Alford had a hit.

It wasn’t a huge offensive day for the Grangers, but they managed to push four runs across against left-hander Chandler Huffman, who threw a complete game.

The Grangers struck first with a run in the top of the first inning.

Morgan led off with a single, and he later scored on a wild pitch to give the Grangers a 1-0 lead.

After Landmark tied it with a run in the fourth inning, LaGrange came right back with two runs in the top of the fifth.

Kevin Neighbors got things started with a two-out walk, and Morgan followed with a single to put men on first and second.

With two outs, Medders drove the ball to the outfield fence for a double, and two runs scored to give LaGrange a 3-1 lead.

LaGrange added an insurance run in the seventh inning.

Colton Esposito reached on an error leading off, and Wolfe legged out a bunt single to put two runners on. Two batters later, Stargell’s RBI single put the Grangers on top 4-1.

Tucker only needed five pitches to finish Landmark Christian off in the bottom of the seventh.

LaGrange has home games the next two days.

After playing St. Paul’s (Ala.) on Friday at 6 p.m., LaGrange faces Harris County on Saturday at noon.