Bearden helping veterans one fish at a time 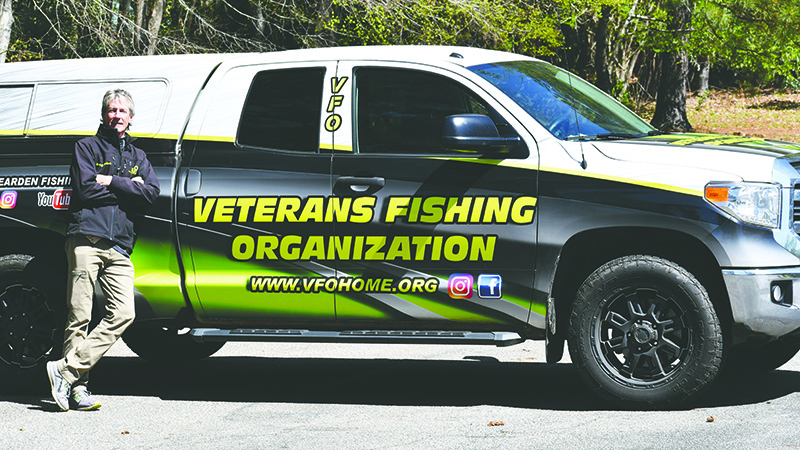 It was a friendship that meant everything to Ken Bearden.

Twenty years ago, about the time Bearden was getting started as a fishing guide on West Point Lake, he met Joe Gilham, an avid fisherman, and a veteran of the Vietnam War.

The two spent plenty of time on the lake, bringing in the big ones, talking, and just enjoying their time together, and that didn’t change when Gilham’s health started to deteriorate.

Whenever Gilham wanted to get on the water, Bearden was there for him.

“At the end, I was practically carrying him out there and putting him in the boat,” Bearden said.

Gilham died in 2013, and Bearden was gratified to learn how much those fishing expeditions meant to his dear friend.

Bearden recalls having conversations with Gilham’s wife, Marie, where she let him know how valuable those times were to her husband.

“She said, when they told him he had a year to live, he would just sit there in the recliner depressed,” Bearden said. “Friends would call, and he wouldn’t talk to them on the phone. He wouldn’t go anywhere. He wouldn’t do anything.”

That, according to Bearden, changed when fishing was in the forecast.

“She said the day you’d call to see if he’d go fishing, the next thing you know he’s out there in the garage, getting his fishing stuff ready,” Bearden said. “She said, that meant so much to me to see him up doing something, and she said I know it meant a lot to him. That’s the only thing that would get him up and going.”

Marie also offered a comment about Bearden possibly providing the same service for other veterans.

“She said, I’m sure there are thousands of other veterans needing to get out, and wanting to get out, but they’re not physically able, or some of them aren’t mentally able,” Bearden recalls. “And I thought, you may be right.”

Bearden, reflecting on his friendship with Gilham and the respect and admiration he had for his friend’s service and sacrifice, decided to follow up on that thought.

The concept was a simple one.

Bearden, for no charge, would take veterans fishing, and he would use his skills as a guide to hopefully help them bring in some of the prized bass in West Point Lake or Lake Wedowee in Alabama, while also giving them someone to talk to, to share their burdens with.

“(Gilham) was very well-loved, real popular, and I wanted to do something in memory of him,” Bearden said. “I thought this is something we can do.”

There was, it turns out, an intense demand for that service, and the VFO has become an enormously popular program.

Rarely does a day go by where Bearden is not on the water with a veteran, and over the years he has met hundreds of individuals who served in the military, many of whom returned home suffering from ailments, physical and otherwise.

“It’s been a life-changing experience for me,” Bearden said.

Bearden grew up in Anniston, Alabama, which at the time was home to Fort McClellan, and during the days he would hear the sounds of the mechanism of war, trucks rumbling down the roads, bombs exploding in the distance, guns firing.

Yet, Bearden admittedly never gave much thought to the individuals who populated the military, and the sacrifices they were asked to make.

Bearden’s focus as a teenager and young adult was on bull riding, and he competed in that sport professionally until he was 30.

Bearden then made the transition to bass fishing, and he was a regular on the awards podium, winning numerous events, including the Georgia State Championship in 2004, and he was the West Point Lake fisherman of the year in 2007.

Bearden competed at the highest level of the sport, fishing alongside other elite anglers at lakes across the Southeast on the various professional tours.

Bearden eventually turned his focus to being a guide on West Point Lake, and he also established a business building custom koi ponds, waterfalls and rock gardens.

All the while, Bearden didn’t give much thought to veterans, although he was surrounded by them every day.

Bearden recalls once finding out that the VFW stood for The Veterans of Foreign Wars, a fact he wasn’t aware of beforehand.

“I lived the American dream, without even understanding what VFW stood for,” Bearden said.

Now, helping veterans is Bearden’s life, and he is happy to pay that debt, to make up for lost time.

The veterans Bearden takes fishing all have their own stories to share, and while many of them have physical limitations, others are dealing with emotional trauma.

One of the veterans Bearden took on the water was 91-year-old George Martin, and just getting him in the boat was a task because of his lack of mobility.

Once they were on the water, though, Bearden watched the smile on the veteran’s face grow, and he caught 10 fish that day.

Another veteran who used to go fishing on his kayak was unable to do that anymore after suffering a gunshot wound in combat, and Bearden was overjoyed to be able to take him out.

Ken Bailey, another one of the veterans who has participated in the program, brought his son, Sky, with him, and Bearden was moved just sitting back and watching the way they interacted.

Being around these veterans, many of whom gave so much, has been an enlightening experience for Bearden.

“It really started to hit me, what these guys have been through,” Bearden said. “What they train for, what they go through, what they sacrifice, what their families sacrifice. We go through our daily lives working and making money, and buying cars, and homes, and raising our children.”

Bearden often follows up with the veterans, calling them or visiting them, just making sure they’re doing OK.

“It’s the camaraderie that he has with the veterans beyond the lake,” said Richard DuPont, a veteran who in recent years has dealt with a host of serious medical issues, including lung cancer. “Even if I don’t catch a fish, just being on the quiet waters and listening to nature puts my head in a whole new place.”

Bill Cobb, a Vietnam veteran who has fished with Bearden multiple times, said “I was barely able to move around, but Ken saw fit and took me out. He was so accommodating with me, and we caught a few fish and had a good time.”

Cobb enjoys catching fish, but he also appreciates knowing there is someone out there who cares about him.

“Ken, if you don’t catch a lot of fish, it’s the talking, and he’s such a Christian man,” Cobb said. “It’s his willingness to do everything for you.”

Bearden is an attentive listener, and he realizes there are aspects of the veteran’s lives they’ll share with him that they won’t talk about with their families.

“A lot of these guys, they’ll open up to me,” Bearden said. “There are no walls between me and them.”

When Bearden isn’t on the water, he’s often raising funds for his organization.

Bearden has hosted various fundraising events, although things have been more challenging over the past year because of COVID-19 restrictions.

While Bearden would always prefer to be on the water, he knows how important fundraising is.

“If I don’t do that, the wagon train stops, and nobody gets to go,” Bearden said.

Bearden, whatever challenges he may face, is committed to the VFO, and he will be there for the veterans as long as he’s able.

“This is not something you just walk away from when you have guys that are depending on you,” Bearden said.