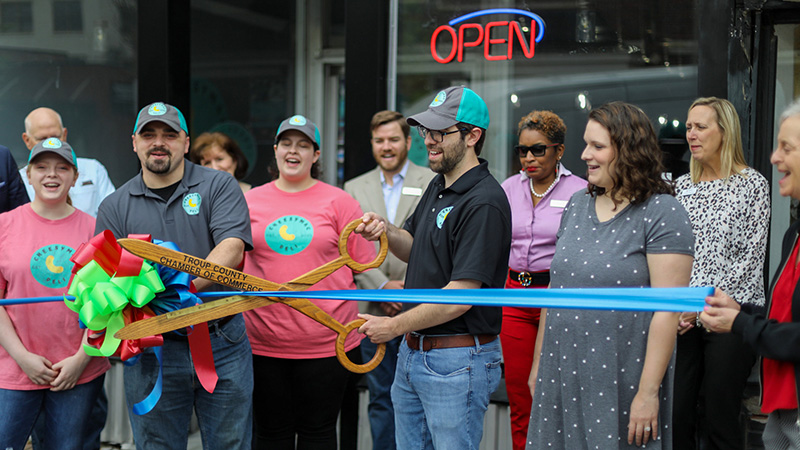 Owner Matthew Oleson said he was excited to see the regular customers already starting to accumulate every week.

“The turnouts been really good, and I think as we get a name for ourselves further in the community that it will just get better,” Oleson said. “It has been a blessing to see repeat customers. They come in, and they like to try something new every time.”

The menu is filled with food that Oleson grew up loving.

“Then also my son loves mac and cheese, and it is kind of a universal staple of comfort food,” Oleson said. “It’s something that most people have loved or still do. It was something I felt like was good to base a whole menu around.”

Oleson said sandwiches were next on the list for some of his favorite foods.

“Being able to take what I love and give it to the community is something I look forward to,” Oleson said.

CheesyMac is the first of its kind in LaGrange, but Oleson plans and hopes to multiply in years to come.

“First, I want to perfect the concept here in LaGrange where I am from and then if there are opportunities to open in another location somewhere in Auburn or Columbus I would love to do that,” Oleson said. “We have a lot to figure out before we expand.”

The CheesyMac menu includes 14 sandwiches, six CheesyMac bowls, six salads and specials like having half a sandwich and some CheesyMac. The menu includes catchy names, such as The Marquis, named after Marquis de Lafayette.

The sandwich is CheesyMac’s take on a classic French dip with roast beef and swiss on a hoagie.

Others are “The Dad Joke” — the cheesiest grilled cheese — “That’s No Buffalo,” and “90 Miles South” among many others.

Before Oleson was creating cheesy recipes, he was selling gourmet pops and is excited to have a food that is good year-round.

“I came up with CheesyMac after a lot of sleepless nights,” Oleson said. “My wife would wake up at two in the morning and see me on my phone and a notepad every night creating ideas. Every time I got an idea, I just had to write it down.”

Years before becoming a business owner, Oleson worked in marketing.

“I took what I learned from that and incorporated it into the development of this,” Oleson said. “After I came up with what I wanted to base it around, I wanted to name it something that was catchy and that wasn’t generic.”

Oleson plans to always keep the location on Bull Street no matter how much growth CheesyMac sees.