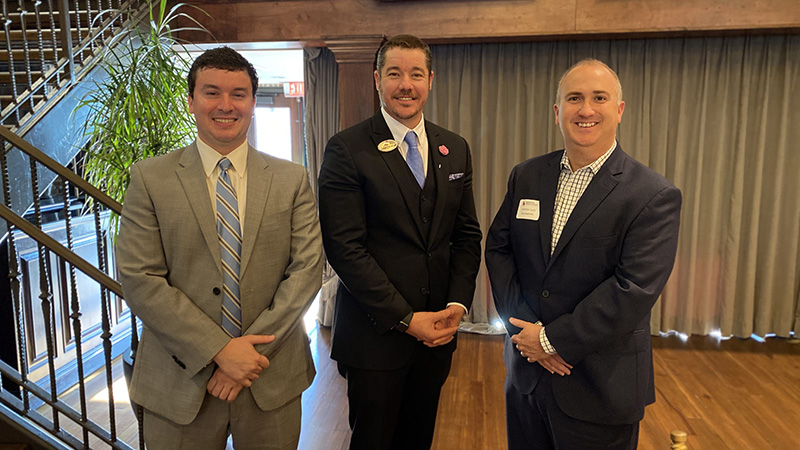 District Attorney John Herbert “Herb” Cranford Jr. gave a presentation of an update from his office Tuesday at the monthly LaGrange-Troup Chamber of Commerce breakfast. He also gave chamber members an overview of what the district attorney’s office does.

“I love being the DA,” Cranford said. “It is a big circuit I serve with five counties. I really feel like this is what I am best suited for, and I need to be in this position. I enjoy it, and I really feel like we are making a big impact in our communities.”

Cranford noted most district attorney offices have a seal for the office that best represents them.

“My instinct on that kind of stuff is that sometimes it is just not genuine and inauthentic,” Cranford said. “When I decided to go through with one that best represents our mission statement, I was very pleased with what we have.”

Cranford said the seal’s backdrop is the Georgia flag because the office represents the state.

“We are the lawyers in the state, and we’re going to try to do what is best for the state and for the community that you represent,” Cranford said. “In the foreground of the seal is Lady Justice. She’s holding the scales of justice, and she’s blindfolded, indicating impartiality.”

Cranford noted that they made her the center because they strive to treat everyone fairly, no matter the person’s background, race or wealth.

Cranford added that the district attorney’s mission is to pursue justice on behalf of the community and victims of crime, to uphold the law and to maintain the trust of the people they serve.

Cranford explained that the DA office prosecutes all felony criminal activity occurring in the five county Coweta Judicial Circuit, which includes Troup County. The office also prosecutes misdemeanors in Heard County and Meriwether County, as they do not have a separate state court.

“It can be a really difficult job because we are dealing with the absolute worst things that happen in our community on a daily basis,” Cranford said. “On a daily basis, we deal with children who have been victimized in ways that I don’t want to convey at a breakfast. We deal with victims who’ve been treated horrifically by their spouse.”

Cranford added that his staff takes on an emotional toll every day, but they do it to protect and serve the community.

“Because of our responsibility and because of the weight of our decisions, I think it’s really important that we endeavor to make those decisions with some humility,” Cranford said. “We don’t think we’re better or smarter than anybody … We are not afraid to use our discretion to cut somebody some slack if we think it is deserved.”

He said his office is constantly prepared and equipped to take on some of the most difficult cases.

“We are prepared to fight for victims and the most difficult cases being victim cases, particularly sex crimes, child cases where the only witness is often the victim,” Cranford said. “it’s a matter of [whether] you have the evidence to sufficiently corroborate that to prove what they said is true beyond a reasonable doubt. Those are very difficult cases because you have to decide if you have enough evidence to put this child or this victim, this woman, through a re-traumatization of a jury trial where a defense attorney is going to be obligated to essentially call them a liar and be aggressively cross examined.”

On a yearly average, the DA’s office pursues prosecution on approximately 80 to 85 percent of all cases it receives.

Cranford said the district attorney’s office dismisses a case if they believe they will not be able to prove the crime beyond unreasonable doubt.

“I think that’s a healthy number,” Cranford said. “We decline to prosecute 15 to 20 percent because we just don’t feel like we have the evidence. I don’t think you want a prosecutor’s office who just takes every single file and throws it up against the wall and sees what sticks. We’re very thoughtful and deliberate about what kinds of cases we pursue.”

Cranford said that the Coweta Judicial Circuit has the fourth highest felony case total out of the 29 circuits in Georgia. He noted that because of COVID-19 and court not being in session, the active caseload has gone up more than 80 percent.

In Troup County, it has gone up 78 percent.

“I don’t ever see us getting out from under this if we keep the status quo,” Cranford said. “It will be backlogged unless something significant changes soon.”

He said that he hopes courts pick up soon, and they can start tackling their case load at full force again.