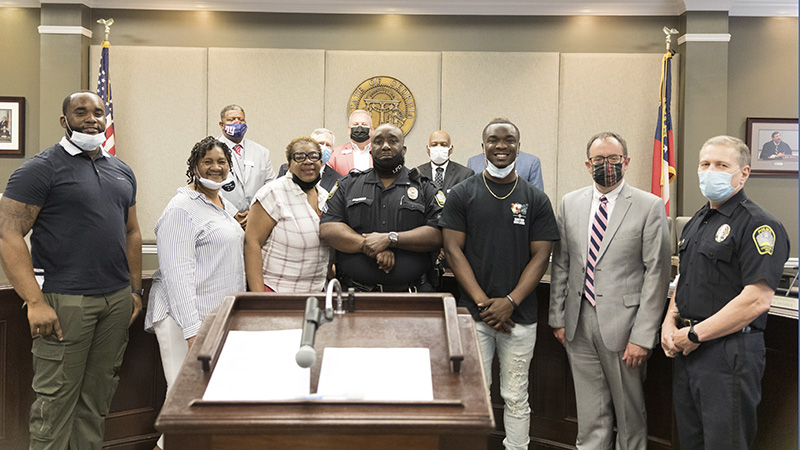 Parks was awarded with a 30-year service pin by LaGrange Mayor Jim Thornton.

“Ricky started his career at LPD in March of 1991 and graduated from the police academy in May of 1991,” Thornton said.

Parks got his start in the patrol division and then was moved to being a warrant officer as well as working in the court system.

“A few years later, Unricky was reassigned to patrol,” Thornton said. “Shortly after, he was asked to start a juvenile program. When the program started, Officer Parks began working in the school system as well with the juvenile court, where he was tasked with court security, as well as transportation of juveniles to and from youth detention facilities.”

“Unricky’s dedication to his community and its citizens has long been noted,” Thornton said. “His positive impact has been made with the youth of this community. He has served as a role model, a mentor, a teacher, a father figure and an ambassador for the LaGrange Police Department.”

Thronton said that Parks’ involvement with the youth has been steadfast through his years at LPD.

“Over the past 15 years, Unricky has assisted with school sports programs as a coach at Callaway High School,” Thornton said. “He has worked with the Boys and Girls Club and has been an important part of the success of the yearly youth camp, which started with only 15 kids. That camp has now grown to more than 80 children. Parks epitomizes human kindness.”

LPD Chief Lou Dekmar said that Parks has gone above and beyond his roles as a SRO.