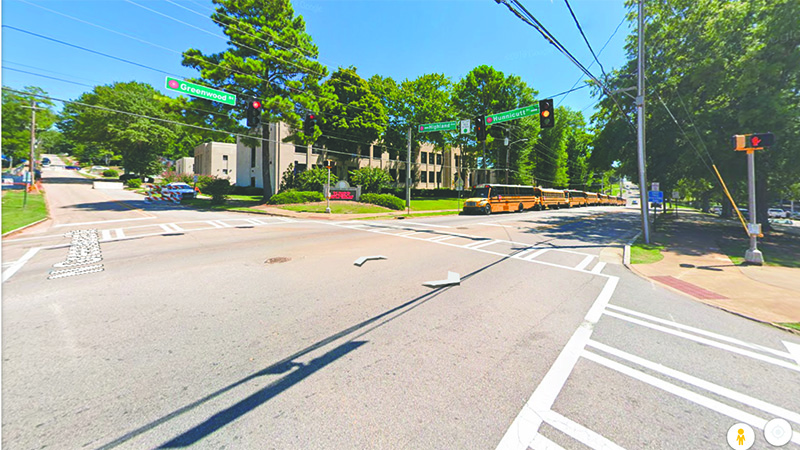 Both students were injured and treated for their wounds at Wellstar West Georgia Medical Center and are recovering at home. LaGrange Police Department Sgt. Marshall McCoy said it was a miracle the two students only came out with minor injuries and that it could have been much worse.

The first incident occurred on Tuesday morning, and the second took place Thursday.

Ellie Moon, a junior at LHS, was struck in Tuesday’s incident. Moone said she’d arrived at the school around 7:17 a.m. for chorus practice.

“I was going to walk in with my friends, but they were taking too long to get their stuff, so I was like, I’ll just meet them when I get in there. So, I went ahead to the crosswalk, and I looked and I saw [someone] who works at the school and she went straight. I have the right away, so I kept walking, and then the next thing I know, I was on the ground. I just opened my eyes, and I just heard screaming. I wasn’t screaming, I was just like sitting there. I was like what just happened?”

Moone said she broke her wrist and has a lot of bruises. She’s getting a MRI on her knee next week to see if there’s any damage.

Her father, Eddie, said it was terrifying to get a call that Ellie had been struck by a vehicle.

“It’s the call you never really want to hear as parents. My older son was in a fender bender once and that scared me,” he said. “And this time it’s even worse when you realize she’d been hit walking, as opposed to being in another vehicle, so that got us very concerned right off. Luckily, we live about a mile from the school, so we were able to get there pretty quickly. We got to see her before they carried her to the hospital.”

A press conference was held Friday at the intersection, with McCoy, LaGrange Mayor Jim Thornton and TCSS Assistant Superintendent Chip Medders all speaking. Together, they said that the city of LaGrange, the Troup County School System, the LPD and LHS are teaming up to work on a solution to protect their students who are crossing the road.

McCoy said Thursday’s incident was a hit and run, and that LPD is currently looking for the driver. The LaGrange Daily News has been unable to reach the student injured in Thursday’s hit and run, but a social media video of the incident showed her being treated afterward at WGMC.

“We are taking this very seriously,” said TCSS Assistant Superintendent Chip Medders. “As you know, this is a very busy intersection. The number one priority for us is to always keep kids safe.”

Medders said it was shocking to hear about the two incidents, but he said the school system plans to focus on intersection safety to remind students of the danger.

“We want to educate everyone on this,” Medders said. “We can educate our kids, and [ensure] they understand the proper way to cross the street. I am working with the LaGrange High administrative teams to make sure we are educating kids. We have an amazing [audiovisual] film program that we will use to create some films, some short educational videos that we can show in our homeroom classes.”

Medders added that TCSS plans on seeing what they can do about adding more supervision to that area.

Thornton noted that neither of the students were jaywalking when struck by vehicles.

“In both incidents, the kids were in the crosswalk and both cars were making a left turn,” Medders said. “Kids have the right of way when crossing the street.”

LaGrange locals were encouraged to pay more attention while driving and to not be on their phones or distracted.

“Slow down, obey the traffic signals and be more attentive,” Thornton said. “Both of these incidents were preventable.”

The city and TCSS also discussed possibly adding more signage to the intersection.

McCoy reminded motorists that vehicles must stop before the crosswalk.

“If you don’t stop at the stop bar, then you put a pedestrian into traffic, which will then present a hazard for them,” McCoy said. “Another thing is if a citizen has entered into a crosswalk you are required to stop, no matter if they are in your lane or not. A lot of drivers think that when a pedestrian has made it past a certain point in the crosswalk then they think it is safe to turn. However, you are not to make any attempt to turn unless that pedestrian has completely left that crosswalk.”

McCoy noted that students have a lot to juggle and have a lot on their plate, especially by the end of the school day. He said drivers need to be aware of that.

“Watch for our children,” McCoy said. “Stay off your phone because there is a lot of distracted driving going on.”

Eddie said he feels like local officials are taking it seriously.

“I feel like they were definitely aware of the problem and definitely want to do as much as they possibly can,” he said.

His daughter has some suggestions for how to make the intersection safer.

“I definitely think that we need a crossing guard,” Ellie said. “I do think that more signs need to be put up, especially close to the student parking lot. Flashing lights. Maybe a protected green for people who are turning just so they can go ahead and turn and get some of those turns out of the way. Honestly, I think anything would help.”

Ellie said she’s thankful for the support of people from LHS, who have reached out to make sure she’s OK.

“The support, honestly, has been outstanding,” she said. “I mean I knew that I had friends, but the amount of texts I saw when I was in the hospital bed and my mom had my phone — it was just blowing up.”

Jenna Eady contributed to this story.