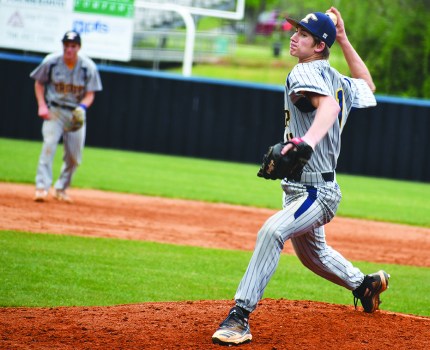 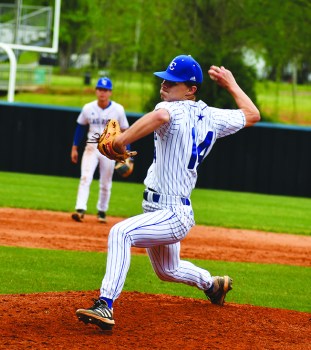 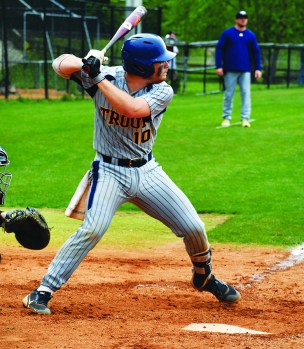 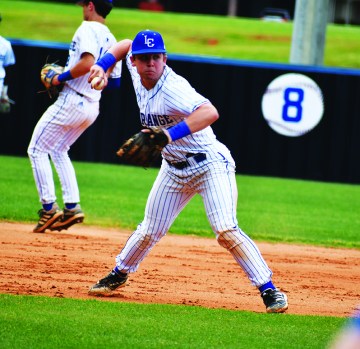 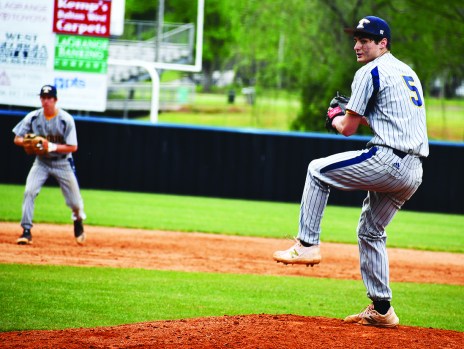 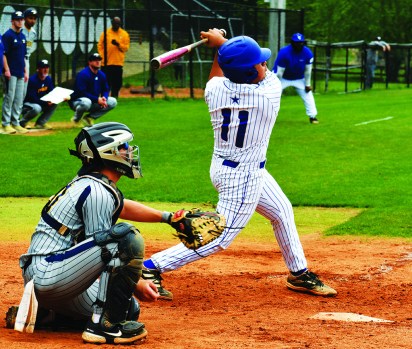 The night belonged to the Troup Tigers.

With first place in Region 2-AAAA on the line, Troup rallied for a dramatic 2-1 win over the LaGrange Grangers before a packed house at Granger Park on Friday.

It was a tie game when Colton Webb stepped to the plate with two outs in the top of the seventh inning, and the senior

drove the ball into right field for a base hit, and Hunter Kitchens raced home with the go-ahead run.

Devon Murphy, who pitched three dominant innings in relief of Daniel Martin, set LaGrange down in order in the bottom of the seventh to finish it.

The Tigers (22-3 overall) improved to 9-0 in the region, and they took a huge step forward in their question for a region championship.

After hosting LaGrange on Monday, Troup finishes its region schedule with two games against Jordan.

“We’re just tough, and resilient,” said Troup head coach Tanner Glisson. “The guys fight. We’ve got a good baseball team, and we do the fundamental things really well. That’s how it’s supposed to be. LaGrange, they’ve got a good team, too. Coach (Donnie) Branch does a wonderful job. I hope it comes to this (playing for a region title) quite a few times in the future.”

It has been an extraordinary season for the Tigers, who have won 14 of their past 15 games and have excelled under the direction of a new head coach.

Glisson, Troup’s head football coach since 2015, was tasked to take over the baseball program after long-time coach Craig Garner left for Northside-Columbus.

“I appreciate (the players) believing in me, when a lot of people didn’t coming from football, and not knowing if I knew baseball or now,” Glisson said. “I’m just really proud of the guys.”

LaGrange (16-9 overall) fell to 7-2 in the region, and it appears locked into second place.

While disappointed to see his team’s region-title hopes likely dashed, Branch knows there are bigger games to come when the state playoffs begin.

“This has nothing to do with our goal,” said Branch, who led LaGrange to a state championship in 2004. “We measure our season on how long we play. We’ve got the playoffs in another nine, 10 days. At that point, our goal is to see how long we can play.”

The Grangers had a 1-0 lead when the Tigers tied it in the fifth inning on an RBI single by Mason Atkinson.

It was still tied when Webb took his turn in the batter’s box with two outs and the potential go-ahead run on second.

Webb got a two-strike pitch he could handle, and he grounded the ball into right field, and Kitchens slid into home plate and managed to avoid the tag, and the Tigers had their first lead of the game.

“It’s a big situation, top of the seventh with two outs and a runner on second,” Webb said. “With two strikes, we’re taught to hit it as hard as we can somewhere, find the barrel, and that’s what I tried to do. I tried to ruin a good pitch, and it found a hole, and I came up big for us.”

The two runs were enough thanks to the exceptional pitching of Martin and Murphy.

Martin started and pitched four innings, and he worked around six hits and three walks and held LaGrange to one run.

“I was mainly focused on throwing strikes, and I knew my defense would be there for me,” Martin said. “That’s all I’ve got do, is do my job.”

Murphy pitched the final three innings, and the only base runner he allowed came on a walk in the fifth inning.

“Our guys were very clutch on the mound today, throwing a lot of strikes and being able to keep them off-balance,” said Webb, Troup’s catcher.

LaGrange scored its lone run in the third inning, with Mason Wolfe leading off with a walk and later scoring on an error on a bunt by Seth Stargell.

The Grangers had plenty of other chances to score in the first four innings, but they were unable to break through.

The Grangers left runners on in each of the first four innings, and the third inning ended when the Tigers turned a double play with the bases loaded.

LaGrange had three base runners thrown out in the first four innings, and in the first inning Troup left fielder Mason Atkinson threw a man out at home to keep it scoreless.

“We did everything it takes to lose a baseball game the first four innings,” Branch said. “We should have extended the lead. That’s where the game was lost. We made coaching errors, we made base-running errors. We were controlling the whole tempo of the game, and we didn’t cash it in.”

Matthew Morgan was exceptional on the mound for the Grangers.

The senior right-hander pitched six innings, and he only gave up one hit while striking out eight batters.

It was the sort of performance Morgan has delivered time and time again during his storied career, but it wasn’t enough.

“He did exactly what I thought he would do,” Branch said. “I said they’d score, zero, one or two. I knew he’d be fine, because he’s good. He’s a competitor. He pitched a winning game. I’m not sure we helped him very much. The players, coaches, none of us did a good enough job to help him.”

In the end, as they’ve done so often this season, the Tigers found a way to win, and now they’re on the verge of a region championship.

The Grangers, after failing to convert scoring chances in the first two innings, scored a run in the bottom of the third.

Wolfe reached on a walk to start the inning, and Morgan followed with a base hit.

Stargell put down a bunt in an effort to move the runners over, and when a throw to third went awry, Wolfe scored.

After Will Alford was intentionally walked to load the bases with one out, the Grangers appeared to be on the verge of a big inning, but Martin got a double play to end the inning.

Martin fielded a ground ball by Turner Cook, and he threw the ball to Webb for the out, and Webb delivered a strike to first base to complete the double play.

The Grangers got two more hits in the fourth inning, but once again they came up empty, and the lead remained 1-0.

The Tigers tied it in the top of the fifth.

Ethan Morton was hit by a pitch to start the inning, and after stealing second, he scored on a two-out single by Atkinson.

It remained a tie game until the Tigers rallied in the seventh inning.

Tre Mosley led off with a walk, and Landon Tucker was brought in to pitch for Morgan.

Morton put down a sacrifice bunt to move Mosley to second, setting the stage for Webb’s heroics.

Kitchens, who entered the game as a pinch-runner for Mosley, hustled home with the go-ahead run.

“He’d been scuffling a little bit,” Glisson said of Webb. “We told him to keep working, keep playing, and that’s what he did.”

Webb and Atkinson had Troup’s only two hits, and Mosley reached twice on walks, and Reed Morris also walked once.

For LaGrange, Tucker had two hits, Alford had a hit and a walk, Morgan, Stargell and Colton Esposito each had a hit, a